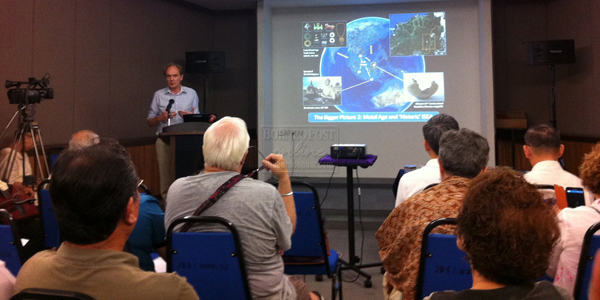 KUCHING: The central highlands of Borneo has the potential to become an archaeological site with its rich and complex past.

Sogang University Seoul Korea, Institute for East Asian Studies (Southeast Asian Archaeology) assistant professor Dr Lindsay Lloyd-Smith who worked as a post-doctoral research associate on the Cultured Rainforest Project (CRP) in the Kelabit Highlands of Sarawak and coordinated the archaeological fieldwork from 2007 to 2010, said spreading knowledge and information from the archaelogical research can better protect the sites and surrounding landscapes.

“What we discovered from CRP during those three years was that we found very large open-air settlement sites dating to 2,500 to 1,000 years ago with what appeared to be stone walls as well as lots of pottery and metal work.

“As far as I’m aware, this could be the earliest metal age site in the whole of Borneo which would be tremendously exciting to find out what are these stone walls and how did they relate to burial activity within the area,” he told reporters after presenting a Heritage Talk on ‘Early Central Borneo: Investigating the Early Metal Age of the Kelabit Highlands’ at Dewan Tun Razak here yesterday.

According to him, the purpose for the project was to shed light on an unknown past which appeared to be very different from recent traditional Bornean way of life in longhouses.

“One aim of the work is to create cultural understanding, appreciation of the value of these monuments to protect the rich cultural heritage of Sarawak.

“These sites are all across the highlands and it is very important to make people aware of protecting the site,” he said, adding that CRP was currently in the writing-up stage and a summary of the results will be shown in an exhibition in late January 2014 in Miri.

To learn more about this exciting early period of archaeology in the Kelabit Highlands, Dr Lloyd-Smith together with a fellow colleague from Universiti Malaysia Sarawak (Unimas) has since embarked on a three-year Research and Community Archaeology and Heritage Project in July this year.

“We’re starting by re-investigating excavations made into several larger stone mounds in Pa’ Lungan and to record them properly to get good datings, scientific samples and make analyses of the trail excavated while also to continue work at large open-air settlements dating 2,500 to 1,000 years ago,” he revealed.

Dr Lloyd-Smith has been working with Southeast Asian prehistory for over a decade on projects in Sarawak, Vietnam and the Philippines.