Thursday, February 2
You are at:Home»News»Sarawak»Squatter gets good news after house collapsed
For the freshest news, join The Borneo Post's Telegram Channel and The Borneo Post on Newswav. 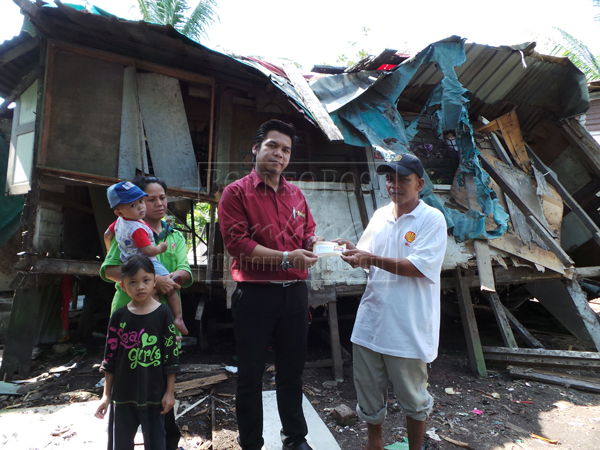 IMMEDIATE AID: Kenny (centre) handing over relief assistance to Azrol and his family at the scene.

MIRI: After being made homeless when his house collapsed in a thunderstorm recently, there appears to be a silver lining for a security guard as he has received a letter of approval for a resettlement lot from the Department of Land and Survey.

An overjoyed Azrol Abdullah, 44, from Kampung Damai Jaya here thanked the department for the resettlement lot in Tudan which he and his family had longed for in the past two decades while squatting at their present site.

“I am really grateful to (Datuk Amar) Awang Tengah (Ali Hassan) for helping us in our application after several earlier applications went unanswered,” he said.

His application was brought to the attention of the Second Minister of Resource Planning and Environment two years ago, which was later forwarded to the Land and Survey Department.

Azrol was caught by surprise when informed early yesterday morning by the Land and Survey Department Miri superintendent Unus Tambi that the state government had approved his application.

He was on the verge of giving up when his house collapsed on Monday this week.

Azrol left school to fend for himself after his parents broke up. There were times he ended up scavenging for food during his young days but later became a fisherman in Sibu and settled down to start a family in Miri, building a wooden house at Kampung Damai.

After two decades, he now has a family of 10 members, including a grandson, and works as a security guard at a primary school.

His rickety house collapsed during a thunderstorm and strong winds on Monday. His wife and family members were lucky to escape alive after jumping off their kitchen at the back of the crumpled structure.

The Welfare Department rushed food items to the family on Monday evening and more immediate relief in the form of school uniforms, clothing, cooking utensils, cash and other items poured in yesterday, which amounted to about RM 2,500.

Miri Welfare Department officer Kenny Watson handed over the items to the family.

Meanwhile, Azrol thanked the department, Baitumal Sarawak and others for their assistance.

“All I can think of is providing a place of shelter for my family, perhaps, a PPRT house by the government at the allocated lot in Tudan,” he said, lamenting that with his meagre salary he would not be able to come up with enough money to build a new house.

He and his family are presently putting up with a relative next door.