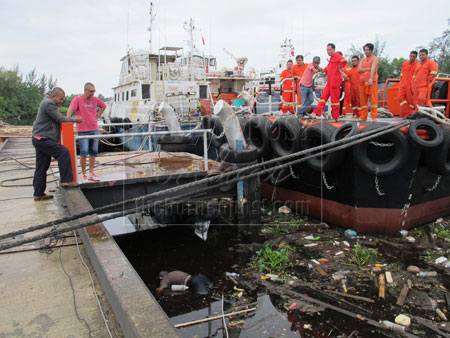 FOUND: The body floating near a jetty on Miri River.

Clad in black trousers and brown T-shirt, it was discovered around 8am by a Piasau Slipways ship crew who informed the police.

The police called for Lopeng Fire and Rescue Station (Bomba) to fish the body out from the river.

A total of six Bomba personnel led by second senior fire officer Roslan Jam and a fire engine arrived at the scene at 9.13am.

Police have classified the case as sudden death.

They have yet to identify the corpse as no wallet or identity card was found on it.

Investigation officer, Sergeant Jemain calls for the public with missing members or relatives to call him at 013-8297746 or come to Miri Central Police Station.