Tuesday, July 27
You are at:Home»News»Sarawak»Man found dead in back seat of car 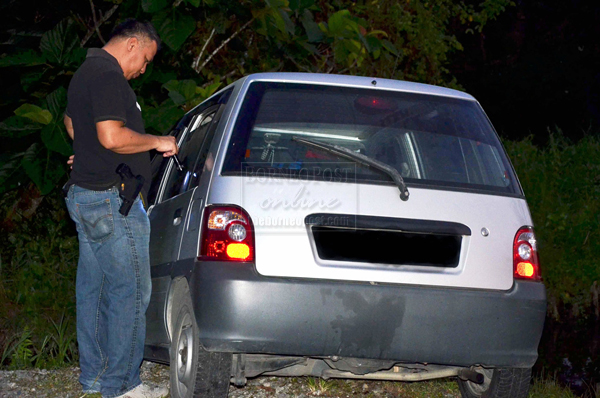 SUDDEN DEATH: A police officer taking a closer look of the deceased in the back seat of the car.

KOTA SAMARAHAN: A hotel cook was found dead in the back seat of a car in Kampung Pengkalan Kuap on Tuesday, less than 24 hours after he was reported missing by his wife.

The case, however, has been classified as sudden death by the police after initial investigation found no physical injuries on the body of the deceased, identified as 29-year-old Curtis Jiee.

The discovery was made around 5pm when residents spotted a Perodua Kancil car parked along a small road at the edge of the village, with a lifeless man seated with his legs across the back seat.

Police were immediately called to the scene to investigate and were initially unable to identify the victim as no personal documents were found on the body.

As initial investigation did not indicate that any foul play was involved, the body was transported to the Sarawak General Hospital where a post mortem was scheduled to be performed.

Yesterday, police were able to track down the family members of the deceased, and subsequently identify him, based on a missing person report lodged by his wife earlier the same morning.

It was said she made the report after Curtis failed to return to his rented house at Kampung Pengkalan Kuap the night before after finishing work at a local hotel in Kuching.

Family members later requested that a post mortem not be performed as they accepted the police finding that no foul play was involved in Curtis’ death, with a relative saying the deceased had suffered from health-related issues.