Monday, January 20
You are at:Home»News»Sarawak»Nanta comes to aid of fire victims 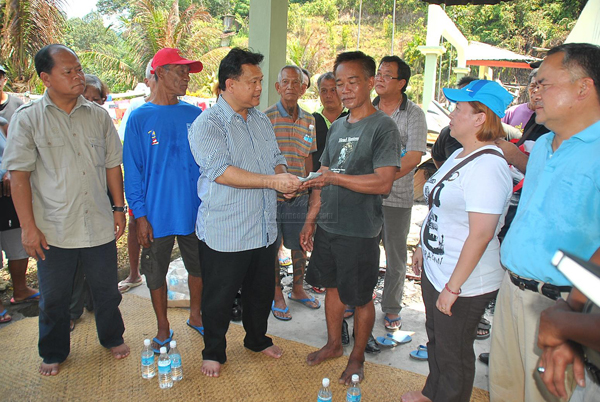 IMMEDIATE ASSISTANCE: Nanta presents his donation to Galau, who received it on behalf of the other fire victims. Nanta also presented to them donations from Jabu and Dr Rundi.

During the visit, he presented immediate cash assistance of RM1,000 to each of the 20 families for them to buy their immediate needs and items.

Among those accompanying Nanta for the visit were Song district officer Jacklyn August, a political secretary to the chief minister Tengku Geruna and Sarawak administrative officer Robert Segie.

At the site, Tuai Rumah Japok gave a brief account on the fire that razed their double storey modern concrete longhouse, and informed that the security and development committee (JKKK) of the village had made a decision to build a new longhouse.

He said they would need government assistance to rebuild their homes, which would be constructed at a new site.

Speaking to the fire victims, Nanta assured that they would receive more assistance, provided they remain united.

“This is not the end, the government will give the necessary assistance for you to rebuild your longhouse,” he said, advising them to lodge a police report on the fire to enable the government to act on their request.

He also told the fire victims that RM4,000 was raised for them during the closing ceremony of Sarawak Iban Community Leaders Conference on Oct 12, which was given to Kapit Resident for disbursement.

To further assist the fire victims, Nanta also provided 10kg of nails, a hammer, handsaw, measuring tape, knife and an axe to each of the 20 families to assist them to build a temporary
shelter.

He also gave two chainsaws, five wheelbarrows and shovels to be shared among them for the construction of their temporary shelter.

Penghulu Galau Melina, who was also affected by the fire, said they moved to the longhouse in 2005.

A woman identified as Ebah Idau suffered burns on both her arms during the fire.