Monday, September 28
You are at:Home»News»Sabah»Urgent need for pedestrian bridge near Penampang schools 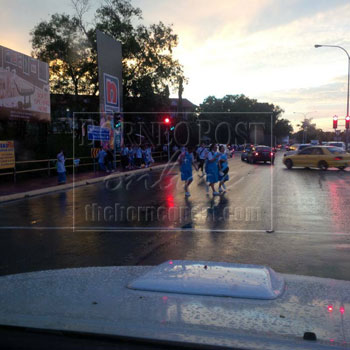 Students walking within only a few feet away from oncoming cars while crossing the road.

Chua said this would also ensure the safety of all pedestrians who wish to cross from SMK Bahang Penampang side to the Penampang Baru shops and facilities.

“Our PKR Kapayan Task force has received numerous phone calls from worried parents and even teachers from both schools regarding the danger that awaits these school children everyday when they cross the road.

“Some road users, including bus drivers, have also shared their experience of seeing some school children crossing the road in a reckless manner,” Chua said.

“Subsequent to the complaints received, the PKR Penampang Development Studies (PPDS) had made its observation and noticed that students from both schools preferred crossing the road just after the streetlights in front of the school.

“However, the PPDS is of the opinion that this crossing path is very dangerous since it is located within the vicinity of a T-junction.

“Oncoming vehicles from Jalan Duta-Bundusan to Jalan Penampang-KK sometimes speed up to beat the yellow light at the traffic light and it is only a matter of time until a driver inadvertently slams into a student,” he explained.

The risk for such an accident to happen will be higher during a heavy downpour as most students would become less careful when crossing the road while rushing to get out of the rain.

The government and local authorities have an obligation to ensure the prevention of any possible accidents and to act immediately before it is too late, he added.