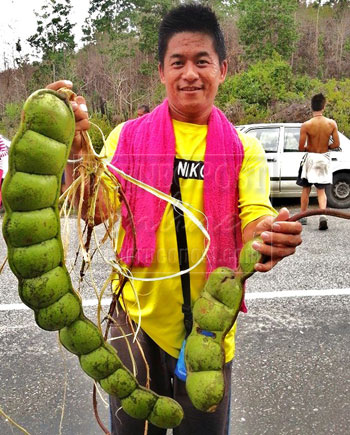 GIANT BEANS: A surprise find for Ngu as he takes part in Sibu HHH run in the jungle.

SIBU: It was a surprise find for Kapit Photographic Society chairman Aaron Ngu when he ran into two pods of giant petai beans during the Sibu HHH Run at Km22 Tunku Abdul Rahmah Road recently.

The run is a weekly sport activity hosted by the locals on Sunday afternoon, taking health-conscious and adventurous runners into the tropical rain forest, rain or shine.

Sibu-born Ngu, who now    resides in Kapit, considered himself lucky in stumbling on the beans because this was his first run in Sibu.

He found them hanging from a bush as he trekked for half an hour into the thick undergrowth with the runners.

“It is an unusual find. The ones sold in the market have pods of not more than one and half inches wide, but, believe it or not, these giant beans are the size of a palm.”

His rare find attracted a crowd.

Being a photographer, Ngu who is in his 30s, was again armed with a camera for Sunday afternoon’s run, and along the jungle track had taken images of pitcher plants and jungle scenery.

Ngu said he did not take the out-sized petai beans when he emerged from the jungle, but gave them away to friends.

He said the giant beans had a stronger smell, recognisable just by holding the pods.

The amateur photographer    said the tropical rainforest of Borneo aroused his interest because it was a treasure house of nature found nowhere else in the world.

“I often go into remote jungles with friends in Kapit to take images of the Borneo tropical flora and fauna, including the rare species of insects and plants, views of waterfall, etc.”

Ngu used to post these images in his Facebook and has received countless “likes” from friends and photographers throughout Malaysia and around the world.

The scientific name of petai is Parkia speciosa — a plant of the genus Parkia in the family Fabaceae found in the tropical rainforest of South East Asia.

It bears long, flat edible beans with bright green seeds the size and shape of plump almonds which have a peculiar smell, similar (but stronger) to the Shiitake mushroom, characterised by some as being similar to natural gas.

The beans are popular as a culinary ingredient in Indonesia, Malaysia, Singapore, Laos, southern Thailand, Burma, and Northeastern India.

It bears flowers in a light-bulb shaped mass at the end of long stalks.

The flowers secrete a nectar that attracts bats and other pollinators.

The tiny flowers mature and die.

Long, twisted, translucent pods emerge in a cluster of seven or eight pods.

When those pods are mature, within them will reside the petai beans.

There are various health benefits in eating petai beans. They contain three natural sugars — sucrose, fructose and glucose; combined with fiber, they give an instant, sustained and substantial boost of energy.