Wednesday, January 29
You are at:Home»News»Sarawak»Unimas set to build more hostels for foreign students 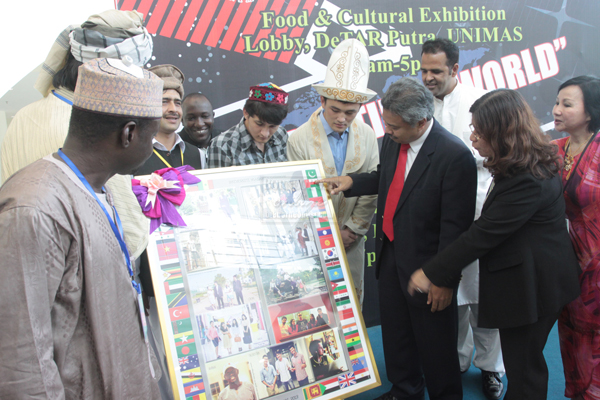 INTERNATIONAL FAIR: Professor Fadzil (third right) looking at a collage of flags of the countries of Unimas foreign students after launching the Unimas International Festival 2013 at Unimas DeTAR Putra Lobby and with him is Dr Kasing (second right) and student representatives from various countries. — Photo by Jeffery Mostapa

KUCHING: Unimas plans to build more and better hostels to accommodate the growing number of foreign students studying there.

Deputy vice-chancellor (Student Affairs and Alumni) Professor Mohd Fadzil Abadul Rahman said that the response for international students to study in Unimas had been encouraging making it necessary for the university to increase the capacity of its hostels.

“They come to study in Unimas because of the strong word of mouth recommendations especially from the ex-international students who went back to their home country and inform their nationals about it,” he told reporters after launching Unimas International Festival 2103 at DeTAR Putra Unimas lobby yesterday.

This is the fourth year the festival is organised by the university’s foreign students and the theme this year is ‘Celebrating 1World’ and this.

Fadzil said Unimas was looking into charging a standard fee for international students because most of them were under scholarships from their countries which were not enough to cover their accommodation and course fees.

“We are getting our Unimas subsidiary company (Unimas Holding) to manage two or three blocks of our hostel and equip necessary facilities for these international student and at the same time to get them to manage the hostel.

“The hostel that we managed now is for our local students and the rate is subsidised through their fees and we have different rates for our foreign students,” he added.

Unimas also plan to get the holding company to manage and at the same time we encourage local contractors to build hostels near the university and rent it to its international students.

During the event, Professor Fadzil and Unimas Head of International Affairs Division Professor Dr Kasing Apun visited the exhibition booths set up by the foreign students.