Thursday, August 13
You are at:Home»Features»Rare bloom in giant’s lair 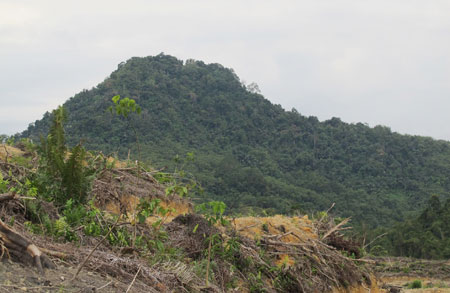 A GROUP of Bidayuh surveyors stumbled upon a huge strange-looking flower and froze in their tracks, wondering if they had stepped into a giant’s lair.

There is, after all, a legend that tells of a behemoth inhabiting the mountainous wilderness where this rare flower blooms.

A heightened sense of foreboding soon mellowed and turned into curiosity as the group began photographing their unusual “discovery” before leaving the site to continue their frontier inspection.

It was October 17, 2013. Murris Sagoi, 63, a JKKK member from Kampung Krusen Kranji, was carrying out an inter-village perimeter survey with 11 other villagers, including his village head Paron Langgar. 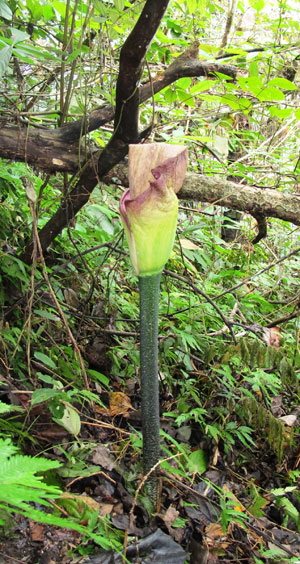 TALL AND STRAIGHT: The Amorphophallus Hewittii of Darud Sirampe stands tall and straight on a bamboo-like stalk.

After treading their way into many areas they have not visited over the past two decades, the group finally came to Darud Sirumpe (officially known as Gunung Sirumpang). This 1,000-feet high mountain has, for centuries, been shared by the villages around it and the surveyors had to ascertain which part belongs to which village.

The way to the mountain was via a trail from Kampung Prangkan. At about 10am, the group reached the part of the mountain purportedly belonging to Kampung Krusen Kranji. They were near the summit before they caught sight of a giant whitish green flower among the shrubs, creeping rotans and trees of the secondary forests. 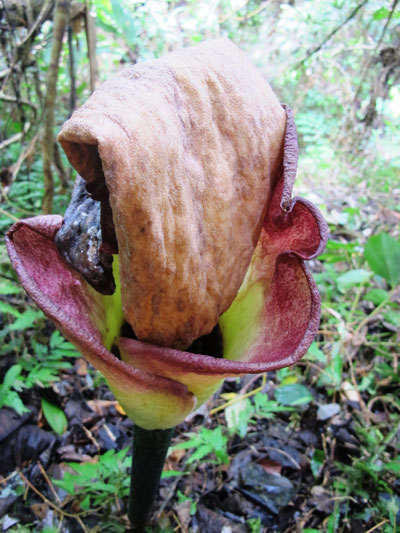 GIANT’S FAVOURITE: The Amorphophallus Hewittii the villagers initially thought was a pet plant of the giant haunting Darud Sirampe.

The cream-coloured flower was bud-shaped – and seemed not to have come into full bloom yet. It was firmly attached to a single stalk with no leaves but only a huge bud over two feet tall on top, and enveloped by a lime green spathe. The sight of the flower gave Murris and Paron goose bumps. The hair on their neck stood up as they gazed (for the first time) at the bizzare-looking plant.

Their reaction was understandable as the Bidayuh community have been living in the area for centuries but there is no mention about the existence of such a giant flower in their folklore or stories passed down by their ancestors. However, there is legend among the Bidayuhs of Kampung Krusen Kranji that the place Murris and Paron were standing on used to the dwelling ground of a giant.

The legend has it that a giant (antu jin in the local dialect) had been occupying the area around the mountaintop. About 20 years ago, the Bidayuhs, who were still planting hill padi in the area, were told making noise between 6pm and 10pm was taboo. 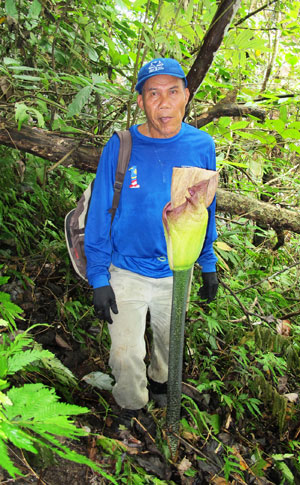 TALL AS A MAN: In full bloom, this Amorphophallus Hewittii is about the height of an average man.

“Even barking of dogs was not allowed. You’d be asking for trouble if you made loud noise as it would draw the giant to you and he would devour you,” Murris told thesundaypost.

With the legend still fresh in his memory, Murris’ first thoughts when he saw the flower were – could the flower be the giant’s pet flower, and had he and Paron “trespassed” into the giant’s backyard?

With all the questions popping up in their heads and after regaining their composure, curiosity got the better of the group and they began taking pictures of the flower with Paron’s handphone before continuing with their assignment.

When they later returned to the village, the image of the flower lingered in their minds. To ease their angst, they finally decided to notify a fellow villager, Peter Sibon, who heads The Borneo Post Special Desk.

“Despite the legend of the giant and everything, we hope someone can tell us what this flower really is – whether or not it can be called a new species since it’s so rare. If so, it will put our village in the spotlight and hopefully, bring in more development,” Murris said.

Their enthusiasm took a knock when Peter told Murris the photos they took were too blur to be used – actually so blur that one could not even make out what the flower looks like. Just a blurry silhouette.

As the photos were out of focus and with the villagers claiming the flower was something the kampung folk have never come across despite living in the area for centuries, Peter and I made the first attempt on October 19 to take a close look at this rare floral specimen.

Murris, acting as our guide, said it would take an hour’s drive – plus some tricky trekking – to get to the site of the flower up in the mountain. We took it easy, thinking a pair of jeans and leather shoes would do for the trip.

Setting out at about 3pm, we drove from Kampung Krusen Kranji to Kampung Prangkan, then endured 15 bumpy minutes, negotiating an uneven and winding road to the foot of the mountain. From there, we hiked up the trail for 20 minutes before reaching a pepper garden with a “resting” shack. By that time, it was already about 3.30pm.

After a short break, we continued our trek and came to a steep slope with a 60-degree gradient. While Murris made the ascent slowly and steadily, we had difficulties taking just one step further. There was nothing to cling on to. The top soil had become very loose due to recent daily downpours, especially in the afternoon. Our worn-out leather shoes, which had no grip at all, were our biggest problem. We moved one step forward but slipped back two steps. Progress was painfully slow.

“We took one hour to get up there. At the rate your guys are going, it might take three hours. By the time we reach the flower and trek back down the mountain, it might be dusk already. I don’t think it’s safe to travel when it gets dark,” Murris advised.

As we were not equipped to tackle the rough terrain, and heeding Murris’ advice, we decided to turn back and try again the next day with suitable shoes and attires.

On the way down to the shack, Murris, knowing we were eager to have a look at the giant flower, forewarned us not to have our hopes up too high.

“A strange thing like that (the flower) might not allow all and sundry to see it. Only the lucky ones have a welcome encounter. It might appear and disappear at will – showing itself if it wants to meet people entering the forest and hiding itself to avoid people it does not welcome,” he explained.

But on the whole, Murris believes the appearance of the strange plant is a good omen, signifying the advent of bountiful blessings for the village.

“If it is a rare species, or even better, one of a kind, then it means the whole forest will be officially gazetted as a forest reserve – something we welcome whole-heartedly because it will attract scientists and tourists and boost economic activities in our village,” he surmised.

The next day (Oct 21), equipped with kampung Adidas (rubber shoes that provide good traction for jungle trekking and worn by many kampung folk), suitable pants and long-sleeved shirts (to prevent mosquito bites), we set out for a re-climb.

The way up from the point of the pepper garden was tough – not only due to the steep gradient and the loose topsoil but also the thick undergrowth and creepers such as thorny rotans. The vague mountain trail sometimes disappeared as it had not been used for the past 20 years. We proceeded slowly and steadily, making sure we followed Murris closely as he stopped every now and then to clear the path with his parang (machete).

While thinking we had only covered about two-thirds of the way, we were jolted from our forlorn thought by Murris’ excited holler – we have reached the flower!

It was such a joy to finally reach our destination but a big disappointment awaited us – a half withered bloom.

But even from its dried up state, the plant was huge, as described by Murris. The flower had an elongated shape with a spathe around a spadix at the centre and was over two feet tall, and the spathe opened up to slightly less than a foot wide. It stood on a single stalk rooted firmly to the ground. Tapping on the stem showed it was hollow inside.

The top part of spadix had withered but its lower part, which was still fresh, had a creamy colour.There was no obvious pungent smell emitting from the flower.

The spathe was medium violet red on the edge, slowly giving way to lime green towards the stalk. Despite withering, it was still very charming and attractive with its remaining colour and shape.

After closely observing the huge inflorescence, we rested for a while before making our way down. There were many times we slipped and slid down the slope. It was a fun experience so long as there were no dangling thorny rotans or undergrowth with sharp spikes along the trail.

While the search for the flower ended, the search on the Internet started. And it didn’t take long to find information on the flower in cyber space.

Apparently, the huge inflorescence belongs to the arum family with the scientific name amorphophallus. Within the family, there are amorphophallus titanium which bears even bigger flowers of up to three metres tall. Due to its unique shape and size, the exotic plant has assumed the name giant voodoo lily and corpse flower.

In comparison, the one found at Darud Sirampe is considered medium-sized, belonging to the sub-species of Amorphophallus Hewittii. In Sarawak, it has also been spotted at Bako National Park, Gunung Gading National Park and Gunung Mulu National Park.

To term the flower as the “giant ghost” is not far-fetched. The blooming of the plant is rare and unpredictable.That’s why after centuries, the Bidayuhs, settled around Darud Sirumpe, have seen it only for the first time during the inter-village perimeter survey.

When Murris and the others saw the flower on Oct 17, it was already in full bloom. But as it took after a yet-to-bloom shape, the group thought it was still in a budding stage.

Whether the Amorphophallus Hewittii found by Murris and the other villagers belongs to the haunting giant or not, no one is certain. And if it does possess any magical powers, may it help fulfill Murris’ fervent wish for more development and progress for Kampung Krusen Kranji.

With the government’s recent approval of turning 120 hectares of village idle land into rubber mini estates, perhaps Murris, who incidentally is the chairman of the mini estate project, will have his wish granted. Perhaps, the rare flower of Darud Sirampe has already brought blessings to the village.