Friday, August 12
You are at:Home»News»Sarawak»Timber company consultant burnt to death 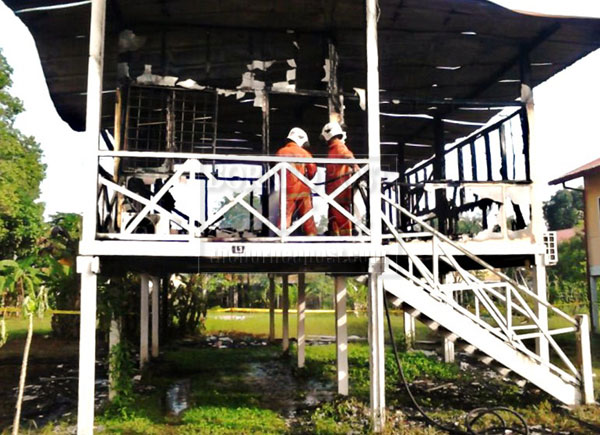 AFTERMATH: The firemen stand at the site where they find Ravendran’s charred body.

SIBU: A consultant of a timber company was burnt alive after he was trapped in the detached stilted house belonging to his timber company in the fire tragedy at daybreak yesterday.

The charred body of Ravendran Chrishnan was found behind the locked gate of the house along Sibu – Tanjung Manis Road, 90 km from here.

Firemen said his body was 90 per cent burnt.

The 50-year-old from Penang had worked here for three years.

His body was sent to Sarikei Hospital mortuary.

The firemen are figuring out why Ravendran could not escape in time when the fire sparked at 6.45am.

They believed the Penangite had awoken from his sleep, tried to run out, but, could not open the gate.

They said a few doubts had surrounded the facts of case – Could Ravendran find the key to open the gate? Was he too shocked to open it? Or was it because he inhaled too much poisonous gas that he collapsed before he could open the gate?

They could not dash in to save Ravendran, but, they managed to drive his four-wheel-drive car out of the fire scene.

The fire brigade from Sungai Merah received the call at 7.04am. They set out with an engine and 12 men.

They arrived an hour later, but, by then, they could not do much.

They controlled the fire in 10 minutes and put it out in another 10 minutes.

Meanwhile, a minor fire broke out on Monday night at a pub at Lanang Road, damaging the properties of the night entertainment centre.

They rushed to the scene in two engines.

The pub is on the first floor of a shop lot while the fire sparked in its office a floor above.

The firemen believed the fire could have sparked from a short circuit in an air-conditioner.

Although customers and workers of the pub escaped in time, the entertainment centre had suffered property losses resulting from the thick smoke.