Saturday, July 31
You are at:Home»News»Sarawak»Man found dead in his room 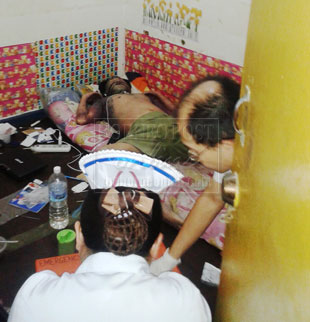 SUDDEN DEATH: Medical personnel arriving to check on the deceased inside his rented room.

KUCHING: The body of a kolo mee seller was found inside his rented room at King’s Centre here yesterday, in what police have classified as a case of sudden death.

The deceased has been identified as Michael Lida, 23, from Balai Ringin.

His death was discovered around 8am when the owner of the coffee shop where the deceased operated his stall went to check on him after not seeing him since Tuesday.

After failing to get any response and discovering that the door to Michael’s rented room was locked from inside, the shop owner scaled a ladder to peer over the partitioning wall of the room and was shocked to see Michael’s lifeless body lying face-up on his mattress.

Police were immediately called to the scene together with medical personnel from Sarawak General Hospital, who certified the victim’s death.

Based on the condition of the body, it was believed the victim had been dead for at least two days.

It was also believed that the deceased had been listening to music at the time of his death, as he had a pair of earphones which was connected to his mobile phone.

The body was subsequently sent to the mortuary for a post mortem to determine the cause of death.

Police have classified the incident as sudden death and are in the process of notifying the victim’s next-of-kin.