Thursday, April 9
You are at:Home»News»Sarawak»Gunmaker arrested, along with assortment of arms 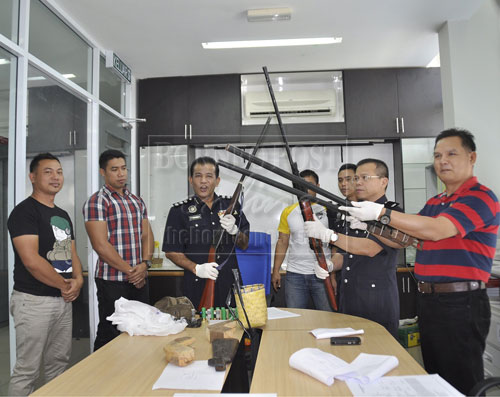 SIBU: A professional gun-maker was arrested by the police on Tuesday along with an air rifle, a shot gun and bullets he purportedly made for sale seized.

“The suspect is an expert in making guns as the weapons seized were properly made,” Sibu police chief ACP Shafie Ismail said in a press conference at Sibu Central police station here yesterday.

He said the 40-year-old suspect completed the work on two guns within two months after learning the know-how for two years.

“He (suspect) only spent his spare time to make the guns,” Shafie said, adding that the suspect worked as a welder at a shipyard in Rantau Panjang.

He believed a gun could be made in a week if it was the main source of income for the maker.

He said the suspect had sold the shot gun for RM500 but it was seized by the police before delivery to the buyer.

Shafie said the police were also looking for the buyer to assist in their investigation.

Apart from selling the weapons he made, the suspect was also believed to have used them for hunting.

The man from Kanowit was detained at a double-storey wooden house at Kampung Baru Road in Rantau Panjang at 6pm on Tuesday.

Also found at the house were 19 bullets for shotgun, including two used bullets, 11 marbles for air rifle, two gun barrels and two pieces of wood, which had been partially crafted to build gun handles.

The police chief said the suspect did not have previous criminal records.

He said the man had been placed under a four-day remand since Wednesday for investigation under Section 8(a) of the Firearms Act 1960.