Friday, September 17
You are at:Home»News»Sarawak»Going the extra mile with MoU for Special Smiles 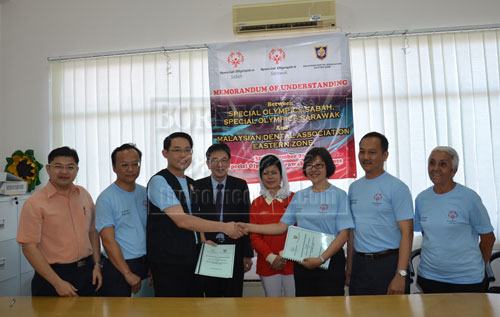 ITS OFFICIAL: Dr Leong (third left) exchanging the MoU documents with Catherine, in the presence of Fatimah (fourth right) and others.

MIRI: The Special Olympics (SO) Chapters of Sarawak and Sabah yesterday moved a step further in advancing dental care and treatment in the country, especially among people with special needs (OKU).

This was made possible with the signing of the first ever such Memorandum of Understanding (MoU) in the country with the Malaysian Dental Association Eastern Zone at the conclusion of the 3rd SO state Games in Miri.

Fatimah, in her address, commented the signatories for initiating the MoU and hoped it will go beyond the two-year period of the MoU.

“I am very happy that the SO Chapters of Sarawak and Sabah are always in the forefront of other SO Chapters in Malaysia. Normally, the SOs of Sabah and Sarawak formed the team of SO Malaysia in world games, truly contributing tremendously although less developed than other states in Malaysia,” she said.

Fatimah stressed that the MoU will go a long way in uplifting the dental standard and quality of life of the OKU and their families.

“With this ‘extra mile’ (MoU), more children and families of OKU will benefit and the State Games too is something that all could look forward too as it not only brought together athletes to compete in various games but benefit from the (HAP) Healthy Athletes Programmes and Train the Trainers (TTT),” she said.

Fatimah, who is also the SO Sarawak Chapter president, said the MoU is also in line with the government’s move to get many people involved in helping the OKU and also setting up SO and also schools operating classes for OKU.

Currently in Sarawak, such classes are established in 40 secondary, 97 primary and six kindergarten and SO Chapters are in Kuching, Sibu, Bintulu, Miri and Limbang.

Dr Leong in remarks earlier said among the primary objectives of the MoU was to raise awareness on the health status of the athletes among dental professionals, thus able to influence and guide policy makers in oral health care services in Malaysia.

Among the terms of the agreements, the association will support Special Olympics Healthy Athletes – ‘Special Smiles’ programme through provision of oral-dental screening, facilities, equipment, clinical volunteers, oral-dental health education and referral guidance for Special Olympics athletes in Sarawak and Sabah.

Among those present at the function were  Miri Hospital director Dr Jack Wong, Regional Clinical Advisor for HAP coordinator and clinic, Dr Toh Teck Hock and Liza Chai – the chairlady for the 3rd SO State Games.