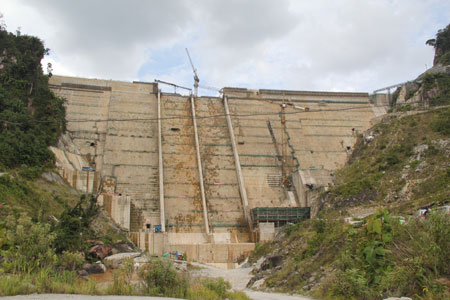 SIGNIFICANT MILESTONE: While not the largest dam in the state, Murum HEP is likely to be remembered in the years to come for the role it has played in influencing the nature of public discourse over the role, impact and influence of large development projects in the state.

With an installed capacity of 944MW generated by four vertical shaft Francis turbines, it is not the largest dam by far (Bakun has a capacity of 2,400MW, while the proposed Baleh and Baram HEPs have a projected capacity of 1,300MW and 1,000MW respectively), but Murum’s design and engineering is still a reflection of how far dam construction technology and know-how has progressed in the state since work on Batang Ai began some 30 years ago.

At its full supply level of 540m above sea level (asl), Murum HEP’s 245km2 reservoir will hold an estimated 12 billion m3 of water.

Impoundment, which began on Sept 21, is expected to take between 14 to 18 months to complete.

Power generation from its first unit is expected to commence in August 2014 and full generating capacity achieved in Feb 2015, according to a recent media handout distributed by Sarawak Energy Berhad (SEB).

During a recent workshop in Bintulu and trip to the Murum HEP site for members of the media organised by SEB together with the Kuching Division Journalists Association and the Sarawak branch of the Commonwealth Journalists Association, reporters were given the opportunity to learn more about the dam from key people involved in the project, as well as the latest progress on the dam’s impoundment.

This included updates on the resettlement of the remaining 192 households from four of the seven affected Penan and Kenyah villagers to Metalun as well as social welfare and economic development programmes currently being implemented in Tegulang which has been resettled earlier in September and October by the 161 households of the first three of the affected villages.

Among characteristics which makes Murum HEP unique is that its original design was modified to incorporate a natural rock formation which is sacred to the local Penan community.

The first plan was to cut through a large part of the sacred rock and fill it with concrete, but after feedback from the state government and local community representatives, the design was changed to curve around the rock instead of through it.

During the International Hydropower Association (IHA) world congress in May, Three Gorges Development Company (Malaysia) Sdn Bhd general manager Zhao Jianqiang told reporters that the curve may actually make the dam stronger by distributing some of the forces caused by the water pressure to the back of the dam after it is impounded.

He added that the curl also worked better than a direct build to join both the banks of the dam together in light of the some shifting in the topography of the banks.

Murum HEP was built using roller-compacted concrete (RCC), which is a special mix of concrete which is much drier than conventional concrete.

The mix is spread on the area being built and literally compacted layer by layer with heavy machinery until it reaches its desired height.

The Murum dam stands 141m high above its foundation, but has a water head of 300m to power its four turbines, thanks to the approximately 150m in height difference between the foot of the dam and the powerhouse.

Its powerhouse which actually sits on the edge of Bakun HEP’s reservoir area. From the powerhouse to Bakun dam is only about 30km in a straight line.

Extensive geological and hydrology studies are carried out before hand to determine a location’s suitability for hydropwer generation as well as what type of dams would be the best option, SEB hydropower development division project director Brian Giles told reporters during the workshop.

For Sarawak, hydroelectricity remains one of the best options for power generation as it is much more cost effective compared to other forms of non-fossil fuel generated power.

Operating a HEP leaves a smaller carbon footprint and a single dam is capable of producing a large amount of power at one time, making it suitable to power large towns and cities.

In addition to adhering to international hydropower construction standards, there are a series of internal and external systems in place to monitor and maintain operations to ensure that facilities and operations remain within safe parameters at all times.

Inspections are carried out on a daily, monthly and yearly basis carried out by in-house specialist teams to provide check and balance.

However, a major concern with any HEP is the problem of siltation which can drastically reduce its efficiency.

Because of this, upstream activities which create silt such as logging have to be monitored closely.

SEB is working closely with various government agencies and non-government organizations on this issue.

Giles highlighted that if with proper maintenance as well as effective water catchment management, HEPs are than capable of operating well beyond their projected lifespan – basically as long as the concrete structures can last.

Perhaps one of the most significant advancements which have been made since Batang Ai is how much sustainability – not only in terms of operations but also environmental and socio-economic aspects – has become key components of the public discourse.

In the last few years, SEB has come under increasingly heavy fire from grassroot groups as well non-government organisations within the state and abroad, for not doing more to help displaced communities affected by the Murum dam and reduce its impact on the environment.

In this respect, SEB is committed to be guided by the Hydropower Sustainability Assessment Protocol (HSAP) formulated by the IHA, not only in Murum but in future projects as well, SEB manager for sustainability Mohamad Irwan Aman told reporters during the workshop.

The HSAP is a sustainability assessment framework which assesses the early stage, preparation, implementation and operation stages of hydropower development against some 20 topics to create a sustainability profile.

In addition to ensuring full compliance with the state’s legal and environmental regulations, SEB is aiming to achieve a HSAP score of ‘3’ which signifies basic good practice, for now.

The highest HSAP score is ‘5’ which signifies best practice.

Mohamad Irwan acknowledged that incorporating the HSAP into SEB’s operations would be an ongoing process of learning and improvement as SEB had only started implementing the HSAP when it become an IHA member in 2011.

The protocols themselves are also quite recent, having only been adopted by the IHA in 2010.

HSAP is not something which can be done quickly as it is a complex process requiring many years to fully and thoroughly incorporating into any organization, he added.

While a seemingly small step forward, Murum represents more than just another cogwheel in the economic machine to support Sarawak’s ambitions to ensure its socio-economic viability and security well beyond 2020.

It reflects an important change in the nature of discussions taking place within the state about how best to meet the wider needs of the people while ensuring that the needs of future generations are not compromised.

In that respect, Murum has and is continuing to set the tone against which future discourses between the various stakeholders will take their cues from.

Previous ArticleKawasan pelancongan di Pahang perlu akses Internet lebih luas
Next Article Each of us has a role to play to prevent crime, says Abdullah