Saturday, August 15
You are at:Home»News»Sabah»First satellite collaring of civets in Kinabatangan 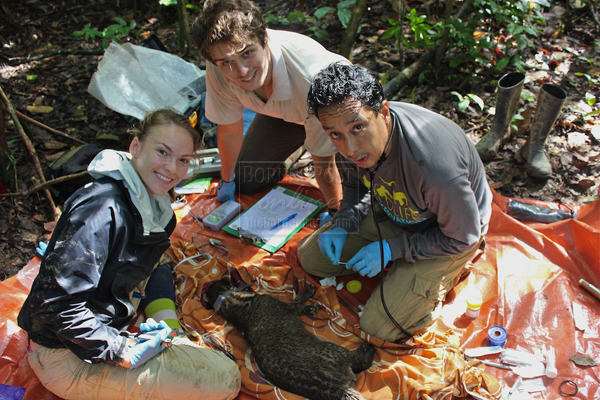 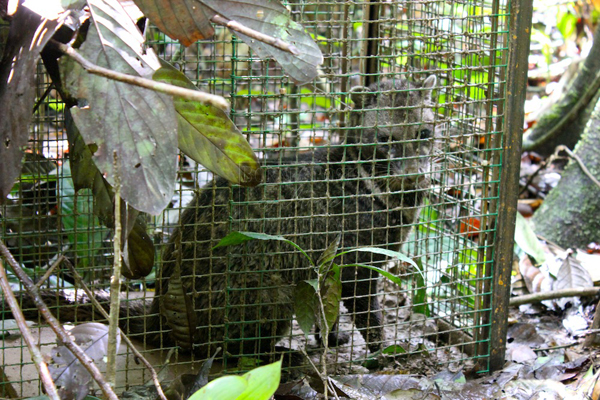 The civet recovering from the anesthesia before being released. 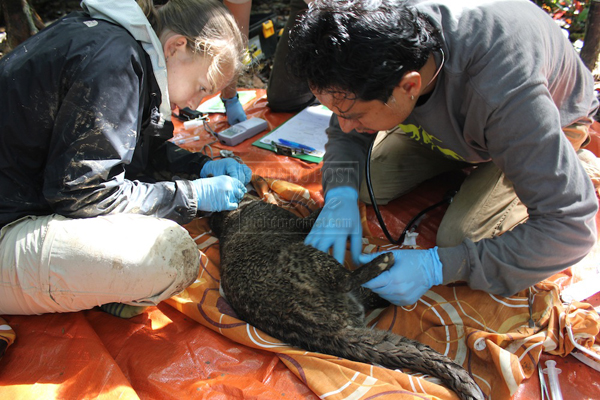 FIRST CIVET WITH SATELLITE COLLAR: Meaghan Harris, a PhD student at Cardiff University, setting up the satellite collar on a 5.5kg civet’s neck while Dr Sergio Guerrero Sanchez checks the civet’s heartbeat. The civet, named Tenang, became the first to be fitted with satellite collar at the Lower Kinabatangan Wildlife Sanctuary. – SEE REPORT IN A5

KINABATANGAN: To better understand the impact of habitat fragmentation on small carnivores at the Lower Kinabatangan Wildlife Sanctuary, two male Malaysian civets were recently trapped and later fitted with satellite collars to track their movements.

The first civet, weighing 5.5 kilogrammes was captured on the night of Oct 26 at Lot 5 of the wildlife sanctuary and was sedated the following morning by the Kinabatangan Small Carnivore Project (KSCP) team, while the second was trapped two days ago.

“Despite heavy habitat degradation within the Kinabatangan, a widely diverse small carnivore guild persists, which includes six species of civets, three species of small felines, and two confirmed species of otters. Our project therefore strives to understand the influences of habitat fragmentation on the spatial ecology and ecotoxicology of small carnivores residing within the wildlife sanctuary,” said Dr Benoit Goossens, director of Danau Girang Field Centre.

Dr Sergio Guerrero Sanchez, DGFC’s wildlife veterinarian, said the 5.5kg Malay civet, named ‘Tenang,’ meaning calm, tranquil or still in Malay, was captured within the wildlife corridor of Lot 5 of the LKWS during the night.

“In the early morning, the KSCP team safely sedated Tenang and conducted the sampling on site. Morphometric measurements, such as total body length and height at shoulder, were recorded, and blood, saliva, faecal and hair samples collected. The project hopes these samples will help determine the health of the small carnivore guild within the landscape of the LKWS,” said Sanchez.

He added the team worked extremely well and the procedure was safe, efficient and minimally invasive.

Project leader Meaghan Harris, who is a PhD student at Cardiff University, said thay as very little fundamental knowledge was known about these carnivores, a 70g GPS collar was comfortably fit on Tenang, making this the first satellite collar placed on a civet.

“The collar is set to collect hourly nocturnal GPS points for the next five months. We have already received a week of GPS data from Tenang’s collar, and the results are tremendously exciting. This information is the first of its kind and crucial in developing informed conservation plans to protect the incredible biodiversity Sabah calls its own.

“Two days ago, we caught and collared a second male civet. Civets, although not as flashy as larger charismatic carnivores such as the Sunda clouded leopard or Malayan sun bear, are extraordinarily important to the rainforest ecosystem, and it will be an adventure to study these animals,” said Harris.

“These results will in turn guide management plans and conservation actions in the future,” he said.