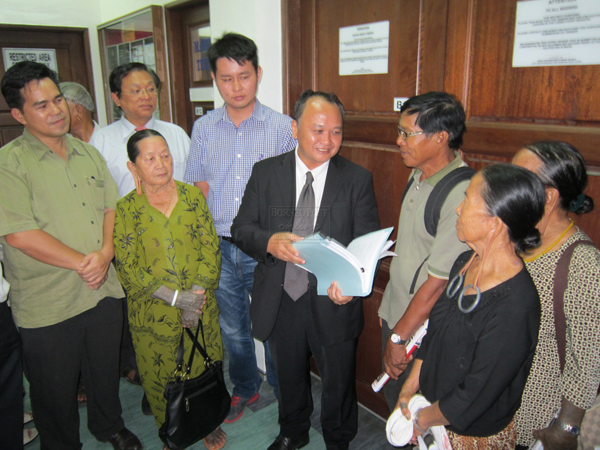 FILING SUIT: Harrison (second right) talks to the plaintiffs after filing the suit. 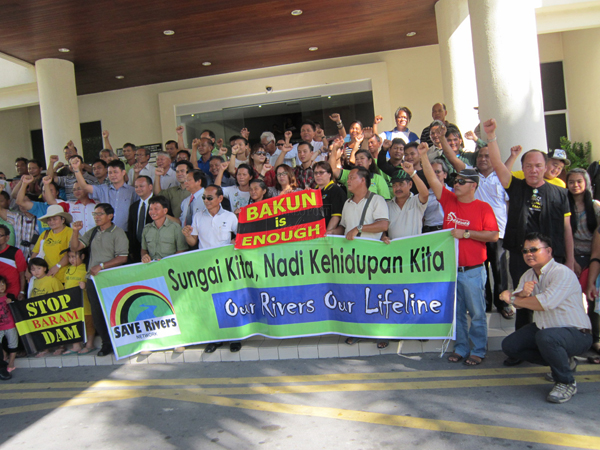 STOP BARAM DAM: The protesters showing their displeasure with the proposed Baram Dam.

MIRI: The people of Long Na’ah and Long Kesseh in Baram yesterday filed a suit against the chief minister and the state government over two plots of land affected by the proposed Baram Dam.

Filing the suit on behalf of plaintiffs Anyi Eng, Edward Jok Wan and Engan Engan, for the people of Long Na’ah, and Anyi Ajang, Malang Laeng and Wan Jok, from Long Kesseh, was activist Harrison Ngau.

They named Chief Minister Pehin Sri Abdul Taib Mahmud, in his capacity as Minister of Resource Planning and Environment, as the first defendant and the state government of Sarawak as the second defendant.

“This is the first case we are filing, but there will be at least two cases. In this case, our ground is that we are challenging the constitutionality of Section 5(3) and 5(4) of the Sarawak Land Code,” Harrison told the reporters after filing the suit here.

“We are saying that the natives are part and parcel of the ancestral land and their rights over the land cannot be extinguished, and that Section 5(3) and 5(4) violated their right to the land.

“They will reply on the fact that the land, being their source of life, cannot be taken away or be extinguished by such law.”

Both lands (4,000 hectares) were said to be affected by the mammoth project in a directive said to be issued on Aug 6, 2013.

He added that the same points were challenged in the Federal Court two years ago in a case against Bakun Dam.

“That case went up to the Federal Court, but somehow it was not answered. In fact, the judges did say there might be such cases in the future where the same points could be articulated again before the court.”

About 70 people from Long Na’ah and Long Kesseh gathered at the court to show their protest against the proposed Baram Dam. They chanted and shouted ‘Stop Baram Dam’, among others, but in a mild manner.