Wednesday, August 17
You are at:Home»News»Sarawak»No basis to bullying claim 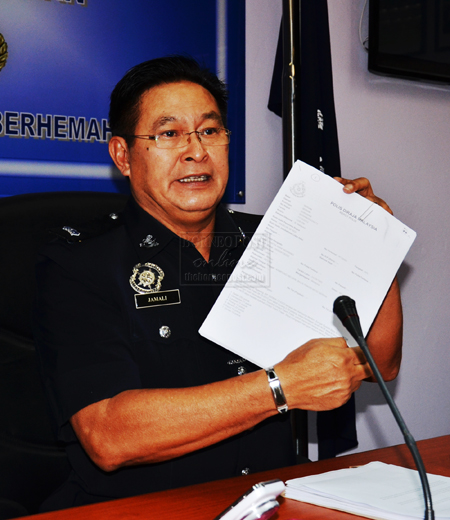 HERE THEY ARE: Jamali showing reporters the 13 police reports lodged by villagers in the disputed areas.

SERIAN: The shocking claim of illegal logging activities and harassment by thugs on residents of eight villages around Melikin and Karangan Melikin has ‘shocked’ the police too – but for completely different reasons.

The men in blue are ‘shocked’ why the affected villagers ran to the press with their tale of armed gangsters harassing them and encroaching into their water catchment area to log the area illegally when none of them (villagers) ever raised the alarm with the police.

In fact, the police are also ‘shocked’ that the area in dispute is in fact a licensed logging area.

District police chief DSP Mohd Jamali Umi said it was unfair for those who were unfamiliar with the situation on the ground to accuse the police of not doing their job without first ascertaining the facts of the case.

“We have so far received 13 police reports made by villagers in the area, and not one has ever mentioned about threats made by thugs.

“Each of the reports complained about the destruction of their fruit trees, rubber trees and other property, with most of them demanding for compensation or seeking legal redress,” he told a press conference held here yesterday.

Showing reporters the reports made by the villagers, Jamali said the police had dealt with each and every report lodged according to standard procedures, such as recording the statement of the complainants and referring each case to the relevant government agencies for further action

Jamali said criticisms of the police turning a blind eye on the alleged encroachment and illegal logging taking place on the Native Customary Rights (NCR) land was unfair as the area in question is a licensed logging area, as far as he was concerned.

“Before the two companies began their operation, we checked all of their documentation and we were satisfied as they possessed the necessary licences issued by the government to harvest logs in the area.

“As far as the police are concerned, the companies have done nothing wrong. Any issue of alleged NCR land encroachment is between the villagers and the relevant government agencies,” he stressed, adding that the picture of a piece of cleared land which appeared on the front page of The Borneo Post on Tuesday- supposedly a result of illegal logging activities- was in fact located within the licensed logging area.

He went on to explain that the so-called dispute in the area was between the two companies licensed to log the area, with each claiming the other had illegally harvested logs beyond the boundary of their concession, adding that the villagers were unfortunately the ones caught in between.

“I have already scheduled a meeting with representatives of the two companies tomorrow (today), and I will sit down with them and get them to air their grievances against each other. My advice to all parties involved in the dispute is to either settle amicably, or go to court.”

When asked on the claims by villagers that they were living in fear due to the threat posed by gangsters in the area, Jamali said the ‘gangsters’ were actually workers of the two companies whose background has been checked by police to ensure none of them possessed criminal records.

“A number of the workers have tattoos, but we shouldn’t automatically brand them as gangsters just because they have tattoos,” he said, adding, however, that police would conduct more checks on the background of those hired by the companies to ensure none of them were criminals.

On claims of the use of firearms and other dangerous weapons to threaten the villagers, Jamali said it was pertinent for the villagers to channel the information to the police so that the necessary action could be taken against the perpetrators.

He pointed to the recent seizure of homemade rifles, pistols and sharp weapons in Serian under Ops Cantas Khas – a result of public tip-offs – as proof that the police would take action if presented with the necessary information.

“If you say that weapons are being used to threaten your safety, tell us. Lodge a report so that we can take action against the perpetrators,” he said, adding that previous cases of villagers being assaulted or threatened had also resulted in arrests.