Tuesday, June 15
You are at:Home»News»Sabah»The fate of elderly orphans in nursing homes 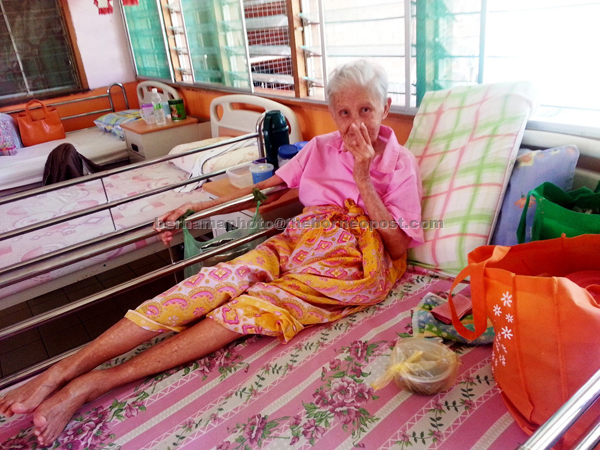 LABUAN: The forlorn figure of a 79 year-old frail resident sitting alone in a room greeted this writer at Labuan’s St Prichard nursing home.

This writer slowly struck a conversation with the man that the caregivers there refer to as James and inquired how he ended up in the nursing home.

In a feeble voice, the senior citizen replied that his family had kicked him out along with his disabled son who was on a wheelchair.

As James had no place to go, he surrendered himself to the nursing home run by the Sabah General Welfare Services Department along with his son.

“Being unwanted, unloved, uncared for, forgotten by everybody, I think that is the worst thing that can happen to anyone,” he said in a voice choked with emotions.

“Here, I realise that I do not have a home anymore. Now, that I am in a nursing home, everything is gone. Here, you are literally in God’s waiting room finishing the vestiges of life,” said the dejected senior citizen.

The 83-year-old lady receives no visitors, not even during Hari Raya.

“I have a daughter who has not seen me for five years and it appears that she does not want to know about me anymore,” says Ibu Mariana who spends her time watching television and reading at the home.

Efforts by the nursing home to contact the daughter also drew a blank.

In reality James and Ibu Mariana are not alone, if you will, as there are probably thousands of other senior citizens who have ended up with the same fate.

With up to 10 per cent of the Malaysian population in the above 60 age group, representing some 3 million people, the number of ‘elderly orphans’ are on the rise as well.

And with more Malaysians enjoying better life expectancy, without a living spouse, without any biological or step children, and without living siblings or half-siblings, the problem of ‘elderly orphans’ is expected to be compounded further by the year 2020.

Many of them want to remain independent for as long as possible, so that they can continue with their daily living patterns, and retain their privacy and dignity.

Yet the ravages of aging often prevent them from living independently, and they end up in nursing institutions.

The writer’s visit to St Prichard Home, which has 78 residents, served as a eye opener on the unseen plight of these elderly orphans that desperately need attention.

While they may have a shelter, they seriously lack emotional support something that can only come from the family and to some extent from social workers.

They are broken hearted, the cry alone and have lost all hope. No one visits most of them, many have been abandoned for good.

The home’s caregivers also pointed out to this writer that because they were abandoned by their respective families, they also suffer from emotional neglect.

They also pointed out that companionship is extremely important for the elderly.

A Universiti Malaysia of Sabah (UMS) senior researcher Dr Romzi Otiong noted that moving into a nursing home adds to the depression suffered by many elderly people, apart from the loss of memory and physical ability, chronic pain or illness, death of loved ones and financial insecurity.

Moreover, many of the elderly keep the problems to their chest fearing that people may think they are losing their mind and they need to be in a nursing home.

“Imagine if you are in their shoes, where you could not talk on the phone, go for a walk, drive to the house of religious worship or read a newspaper.

“Many of your loved ones may have died or moved away. Asking for help is not an option. Just imagine how lonely it would be,” says Dr Romzi about old folks left in nursing homes.

“Some senior citizens have relatives, but none ever visited them. We are often told they could not even remember if the relatives have visited them,” he says.

Nevertheless, with the rise in the graying population, Malaysians have to find ways to better accommodate senior citizens within the society instead of just leaving their fate with the nursing homes.

Caring for the ‘elderly orphans’ should be all encompassing, taking into consideration their emotional needs as well, like how orphan children are cared for. And one should not forget that taking care of the old is not the authority’s responsibility but it is the family’s responsibility. — Bernama