Friday, May 7
You are at:Home»News»Sarawak»Younger voters a force to be reckoned with 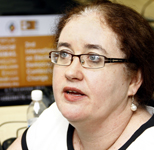 KUCHING: One of the major trends in the political landscape of Sarawak is the demographic shift to younger voters, observed a seasoned political scientist Assoc Prof Dr Bridget Welsh.

“More younger voters are fence-sitters, so the next election is really about how voters under-30 vote. Many young people are disengaged with the political process and are not registered voters.

“This could be a strength to whichever party, be it government or opposition, that register and engage with them.

“Another trend is the transition of leadership within political parties, which is an inevitable shift. It is a good trend over the years, with more women representation and younger candidates, which we can see in PBB and DAP.

“It is about who’s coming in and how they engage the people. This could be one reason PBB did well in the last election and will continue to be an important aspect in the future,” she told reporters at the Second International Conference on Elections and Democracy: Continuity and Change in Unimas yesterday.

Welsh, who delivered a keynote speech titled ‘The More Things Change, The More Things Stay the Same? Elections in Southeast Asia’, also noted that in future elections, the issue of religion could play a part in the electoral process.

“This is more so in the post-discussion on the Allah issue. Many Sarawakians are uncomfortable with the decision, which needs to be clarified and negotiated as Sarawak has multi-ethnic and multi-religious groups. Religious identity is slowly coming into the politics of Sarawak,” she said.

On rural folks and their part in the election process, Welsh believed there is need for more effort to ensure they can exercise their right to vote.

“One of the concerns in the last election was that some polling stations were too far from the rural communities. This should be taken into consideration by making polling stations closer for the sake of older voters.

“It can be transformation in the administrative aspect that enables all Sarawakians to participate in elections,” she pointed out.

She believed that Chinese voters are not at risk as they are still an important part of the electoral process.

“The reason parties like SUPP and MCA were powerful was because they represented their community well but have lost touch with their ground. There is a need for significant reforms within the parties so they will be seen as relevant representation again. The Chinese make up a large part of the population and are as important as the other races. There are many deciding voters and kingmakers in Malaysia and they are not confined to ethnicity. They include the young people, women and others,” she observed.

She found that across the region, there are more demands for better governance and that elections are no longer just political rituals but empower ordinary people.

She spoke of similarities and differences in the election process of countries in focus, pointing out the major changes taking place in how people vote and how political parties campaign as well as the emergence of social media and sophisticated tools that analyse voting patterns.

Welsh teaches courses on comparative politics, gender and international relations at Singapore Management University. She has immense first-hand experience in elections held in Malaysia, Singapore and other parts of Southeast Asia, and has penned many books related to Southeast Asian politics.

Over 40 papers will be presented during the two-day conference, which aimed to provide a platform for local and foreign political scientists, researchers, practitioners and the public to better understand and appreciate the electoral systems and democracy.

The Borneo Post is one the main sponsors of the conference.