Wednesday, November 30
You are at:Home»News»Sarawak»Nabbed for collecting toll at blockade 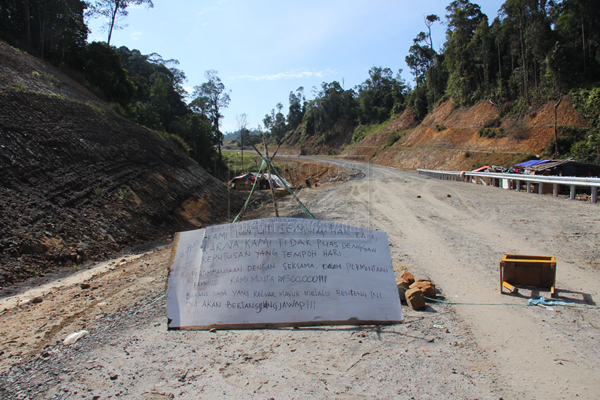 SHOW OF DISSENT: Recent file photo of crude blockade put up by the Penans at Murum Dam

KUCHING: Police arrested eight Penan protestors near the Murum dam at about 2pm yesterday for demanding money from motorists passing through their blockade.

Belaga police chief DSP Bakar Sebau when contacted by The Borneo post confirmed the arrests of the eight Penan men for “wrongful constraint” under 341 of the Penal Code.

He said the eight men have been taken to the Belaga police station for further investigation but the police were unsure if they would be remanded.

“We have to act as we have received two reports from members of the public on Wednesday and yesterday we received another report that Penans collected money from them, prompting us to go to the site and investigate.”

Beside arresting the eight men, the police also confiscated two oil drums, rocks, banners used for the blockade and a container which contained cash of RM735 which the police believed were collected by the Penan men from passing motorists.

“When we reached the blockage site yesterday, we found the eight men manning the blockade and when we asked them to disperse, they refused and we have no choice but to act,” said DSP Bakar.

Bakar added that 20 men, 20 women and 30 children were also at the blockade site yesterday but they were not arrested as they were not involved in the alleged wrongdoing.

“More than 80 police personnel including 40 FRU made the arrests of the Penans who put up blockade in Murum dam access road near Sungai Majoh Kecil within the Dam site,” he said in a SMS alert to The Borneo Post yesterday afternoon.