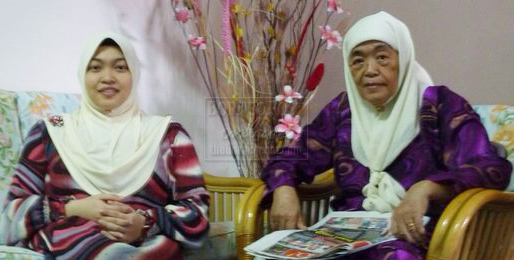 IRON LADY: Siti is seen with her mother.

STATURE and gender do not tell the real stories of one’s strength. Rather, it is the acceptance of challenges and overcoming them that defines a person. Be it a diminutive lady or a strapping hunk, both have the ability to triumph over a difficult situation as long as they possess the tenacity and perseverance to see it through.

Siti Zuraidah Muhammad Husain is one diminutive lady who has prevailed against the odds. I have known her since 2006 when she was an administrative officer with the Japan International Cooperation Agency (Jica). Although we attended several week-long workshops together where we became good friends, I knew little about the story of her life until I interviewed her for this column.

Born in 1981, she is the youngest of four siblings and the darling of the family.

“When I could not move my legs at five months old, my parents took me to the hospital,” she recounted those early years of her childhood. “It was only after seven long years and many tests later that the doctors discovered a rare tumour in my spinal cord called a teratoma. The growth was successfully removed but I remained a paraplegic.”

Her mother had to carry her to classes every day when she attended primary school. A pressure sore on her buttocks that turned nasty interrupted her schooling in Primary 6. She had to stay in the hospital for almost a year. The headmaster refused to let her sit for the UPSR for fear she would drag down the overall results of the school should she fail.

Not one to accept the unfair treatment meted out to her daughter, Siti’s mother refused to take no for an answer and looked high and low for a resolution. A chance meeting with an officer from the Ministry of Education at the hospital cafeteria resulted in a timely intervention. The headmaster eventually relented and allowed Siti to take the examination from her hospital bed.

She attended only the first two days in secondary school before she had to stop again due to further complications from the pressure sore. Her parents strongly believed in getting her a good education despite the circumstances. They employed tutors to guide her in English, Malay, Mathematics and Religious Studies while she studied by herself for the other subjects. She passed the PMR
and continued studying from home.

Siti returned to school in Form 5 when the pressure sore finally got better. She was assigned a classroom on the ground floor. However, the school administration chided her for wearing blouse and skirt as her uniform instead of a headscarf and baju kurung. Her mother had to get a letter from the doctor explaining the necessity for her to wear suitable clothing that is airier and more comfortable to expedite the healing of the sore.

With the unwavering support of her parents and siblings, Siti went on to study business administration at University Tun Abdul Razak (Unitar). It was not easy though. The lecture halls were located on the upper floors of a row of shop houses. The university security guards had to lift her and her wheelchair up a flight of stairs to get to the elevators. Luckily for her, she only needed to attend the lectures twice a week. Her perseverance eventually paid off. She graduated after four and a half years of slogging at it.

“I have proven to myself and the world that disabled persons too can get a degree. We are no different from anyone else,” Siti beamed as she talked about the proudest moment of her life albeit with a tinge of sadness that her father could not be there to share in the joy. He passed away during her last semester.

With the graduation behind her, she came face to face with another set of problems. Only she knows how many job applications and resumes she sent out after that. She attended career fairs but employers were reluctant to hire her. After a year of receiving one rejection after another, she finally landed the job with Jica. That was where we first met.

I saw her as a bubbly person who was always generous with her smiles and polite words. She never let the hardships that she had endured all the years before that show. However, hidden beneath that sweet countenance is a fiercely independent and ambitious woman.

That ambition drove her to take up a post-graduate course with Open University Malaysia (OUM) in between her full-time job now as senior management executive with PLUS Malaysia Berhad. She will be graduating with a master of business administration next month. Her one gripe about OUM is the lack of accessible parking. She always had to arrive at the campus very early to get a parking space that was convenient for her to get out and back into the car again.

Siti wants the government to ensure that there are adequate accessible facilities in public places, government offices, shopping malls and tourist spots.

“There are not enough facilities for disabled persons. Many buildings do not have lifts and ramps. Not all hotels have accessible rooms. Shopping malls do not pay enough attention to our needs.”

On a personal front, she looks forward to the day when she can live a life free from discrimination and not be seen as an oddity just because she uses a wheelchair. Her time working with Jica opened her eyes to the possibilities of a society where disabled and non-disabled persons can live together in dignity and harmony.

Siti has taken all the good and bad in her stride. Her resilience in the face of adversity is a trait worthy of emulation. After what she has gone through, there is nothing that can stop her now. She is an embodiment of the indomitable human spirit. She is one tough cookie.