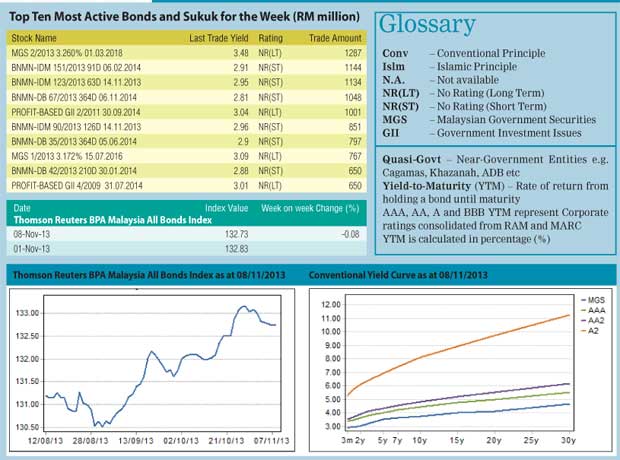 For the week ended November 8, the TR BPAM All Bond Index fell by a slight 0.08 per cent to close at 132.73 from the 132.83 reading last week. The losses were mainly due to the rise in Malaysian Government Securities (MGS) yields over the course of the week, especially for the longer tenure papers.

The MGS yield curve steepened between November 4 and 8, 2013, as the three-year MGS fell one basis points (bps) while the 10-year MGS climbed six bps over the week after the US Treasuries weakened at the start of the week as investors yet again speculate the US Federal Reserve ending its quantitative easing earlier following news on Tuesday that the US non-manufacturing sector grew at a faster rate than expected in the month of October, as indicated by the higher ISM Non-Manufacturing Index at 55.4.

Bond trading activities were mostly light as market players awaited the outcome of the Monetary Policy Committee Meeting for the year. Bank Negara Malaysia kept the Overnight Policy Rate unchanged at three per cent, citing that it sees continued uncertainties in the balance of risks between growth and inflation. As a result of domestic cost factors such as the rise in fuel prices, inflation is expected to move forward but remain manageable.

Domestic demand continues to support the Malaysian economy albeit at a moderate pace due to public sector consolidation and some moderation in private consumption.

The total trade volume of the top 10 most active bonds was relatively unchanged from that of last week, increasing by RM0.8 billion to RM9.3 billion this week. The five-year benchmark MGS paper maturing March 2018 topped the list with RM1.3 billion worth of papers changing hands this week.

ABHC Sukuk Bhd, the funding vehicle of Al Bayan, a Saudi-based conglomerate which is mainly involved in the provision of services such as construction of public infrastructure, supply of equipment as well as provision of telecommunications and business information technology solutions to the Government of the Kingdom of Saudi Arabia, issued a one year sukuk bearing a profit rate of 4.2 per cent. The Sukuk is rated AA3(s) by RAM Ratings.