Saturday, August 15
You are at:Home»News»Sarawak»Nature fest evokes proposal for a Wallace museum 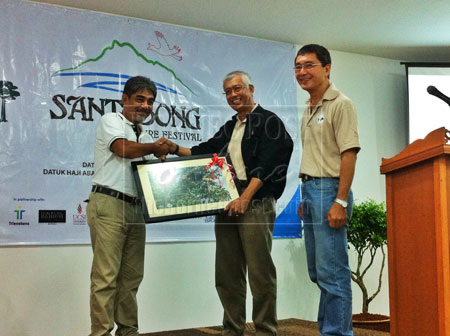 KUCHING: The inaugural Santubong Nature Festival (SNF) is poised to generate a lot of synergy between various agencies in the appreciation and conservation of the Santubong peninsula.

With development from the city now encroaching into the area, it is increasingly vital for Santubong to be preserved as it is, said Kuching North City Commission (DBKU) Datuk Bandar Datuk Abang Abdul Wahab Abang Julai.

“It has history and rich archaeological treasures waiting to be discovered. It was the location of the first settlement in western Borneo dating back 1,600 years. Alfred Wallace wrote the first theory of evolution here just 150 years ago. It was where the Japanese invasion began in Kuching,” he said when launching the SNF.

With so much scientific research left to be done and many attractions that could be packaged, Gunung Santubong deserved to be better known in order for its significance to be appreciated, he added.

Abdul Wahab raised the idea that Wallace’s Bungalow could be repaired and converted into a museum to show artefacts found in Santubong.

“When tourists come here, they can go to the museum and learn about the history of Santubong.”

Abang Abdul Wahab said SNF co-organiser Malaysian Nature Society Kuching Branch (MNSKB) was on the right track when it comes to helping enhance the city’s profile and getting agencies as well as more young people involved.

In his speech, MNSKB chairman Anthony Sebastian said there was a need to develop Santubong wisely as not all the development currently happening there was for the best.

“We are not against the government or development. We just need to develop wisely,” he said, adding that Santubong is a globally important site.

While MNSKB served as the co-organisers together with Permai Rainforest Resort, numerous other groups came out in support.

“Promoting appreciation and understanding of the natural heritage of Santubong begins with involving people. We can only appreciate what we know. If we don’t know, it is of no value to us,” said Anthony.

The festival kicked off Saturday at Permai Rainforest Resort with talks, walks, outdoor activities and events.