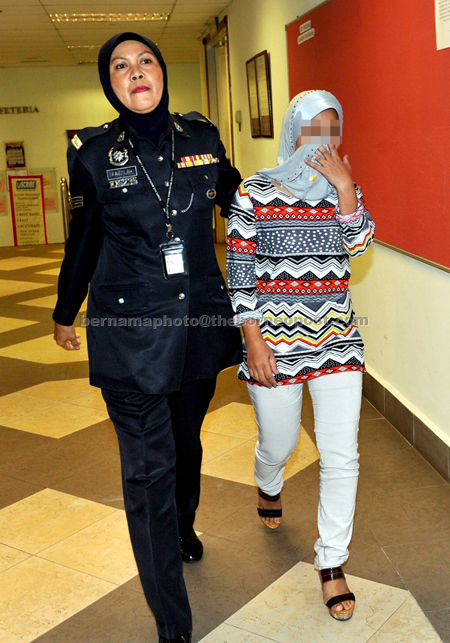 NOT GUILTY PLEA: Rosita being led out of the court room after she pleaded not guilty. — Bernama photo

KUALA LUMPUR: The owner of Taska Permata Harapan was charged in the magistrates’ court here yesterday with abusing a child at the child-care centre last month.

Rozita Awang, 35, is charged with abusing the boy, who is one year and eight months old, which could possibly cause him physical and emotional injury, when he was placed under her care.

The woman, who has six children of her own, is charged with committing the offence at the living room of the child care centre at Taman Melati, Sentul here at 11.35am on Oct 18.

Her husband, who is a taxi driver, and their six children, the oldest, aged 10, and the youngest, one and a half years, were also present in court yesterday.

Deputy public prosecutor Siti Aishah Ahmad did not offer bail, but lawyer Muhammad Syazwan Mohd Salleh, representing Rozita, requested for bail as his client had to care for her children who were still very young.

He said Rozita’s husband, who is her bailor, also promised to bring his wife to the court for hearing of the case.

Rozita, who was in the dock, was seen crying when her lawyer asked for her to be allowed bail.

Magistrate Siti Shakirah Mohtaruddin then allowed Rozita bail of RM5,000 in one surety.

The court set Dec 10 for mention.