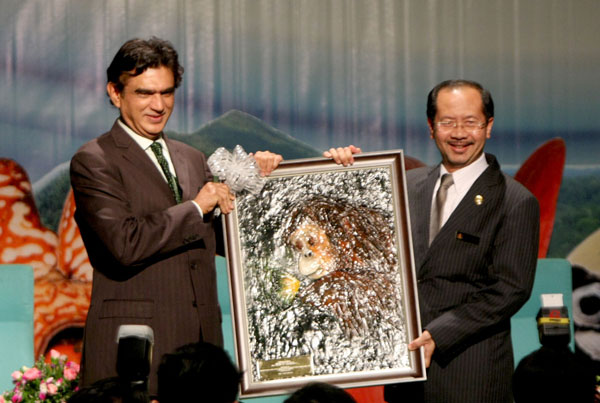 Sam Mannan (left) presenting a memento to Dr Abdul Rahim at the closing of the International Conference on HoB Natural Capital yesterday.

KOTA KINABALU: The federal government is committed to the Heart of Borneo (HoB) Initiative and will continue to support Sabah and Sarawak in the implementation of various projects and activities under the Initiative.

Minister of Natural Resources and Environment Datuk Seri G Palanivel said RM23.68 million had been allocated for various programmes under HoB since 2009 and more could be expected to be channeled in the coming years.

He added that supporting programmes related to HoB would be enhanced under soon-to-be set up National Biodiversity Centre, the establishment of which would now be fast tracked.

“I am glad to share that as part of our effort to leverage on scientific knowledge, the First National Council on Biodiversity chaired by the Prime Minister on Oct 22 agreed to fast track the establishment of the Centre.

“We foresee that through the establishment of the Centre we would enhance and support programmes related to biodiversity and forestry, including the HoB Initiative,” he said in his speech in the closing of “International Conference on HoB Natural Capital” here yesterday.

The text of his speech was delivered by the ministry’s deputy secretary general Datuk Dr Abdul Rahim Nik, who also officiated at the closing on his behalf. Also present was Sabah Forestry Department director Datuk Sam Mannan.

Palanivel noted that the implementation of the HoB Initiative in Sabah has had many successes, including an increase in protected areas, since the introduction of its first Strategic Plan of Action (SPA) back in 2008.

These new protected areas, he said, had increased the connectivity in Sabah’s networks of forests and thus increased the survival chances of endangered wildlife dependent on theses forests.

Noting that Sabah is currently revising the SPA, he urged those involved to ensure the revised version would provide for more coordinated and synergistic efforts for achieving the overall goal and vision of the HoB Initiative.

Commending the state government for its own commitment towards the HoB, he said Sabah as well as Sarawak had made substantial contributions under their respective annual budget towards the implementation of the Initiative.

“I am also glad to know that the state government of Sabah through the Sabah Forestry Department took a leading role in implementing various conservation efforts and activities under the HoB Initiative in partnership with various international and local agencies as well as the local communities,” he said.

He also noted that Sarawak had approved an HoB Plan of Implementation Framework (PIF) end of last month, which further affirmed the state’s commitment in strengthening collaboration with non-governmental organizations and local communities in implementing HoB related programmes.

Touching on the Conference, he said 750 participants of different backgrounds representing various local and international agencies took part in the annual event this year.

He said the two-day conference had not only provided information but also served as a platform for discussion and exchange of ideas among relevant agencies and individuals to move forward in the implementation of HoB in Sabah.