Thursday, August 6
You are at:Home»News»Sarawak»Fatimah shells out RM70,200 to voluntary welfare bodies 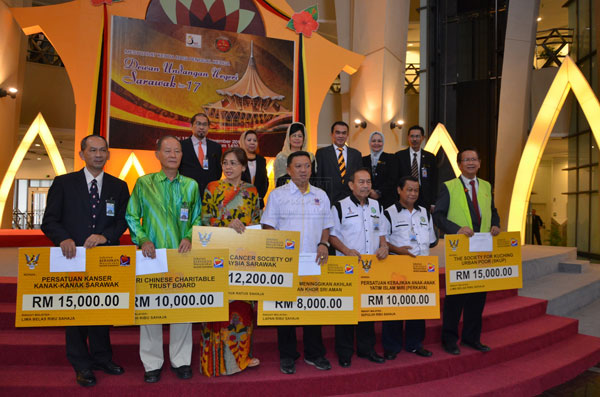 WELFARE AID: Fatimah (third left, back row) poses with representatives of six voluntary welfare bodies after handing over mock cheques to them. With her at the back row are Rosey (second left), Lawson (third right), Noriah (second right) and others.

Speaking at a simple presentation ceremony on the sidelines of the State Legislative Assembly meeting yesterday, Fatimah said the grants were used to help the associations in their activities.

“This is to allow these welfare bodies to help their target groups — be they children, the elderly, the handicapped or the sick and others,” she said.

Fatimah also disclosed that the ‘Sarawak Walk of Love, Series 1’ themed ‘We care, We Share’, one of the main activities held by the Welfare Department last year, attracted 190 non-governmental organisations (NGOs) and 7,000 participants.

Held at Le Park on Oct 5 last year, she said the event was non-competitive, much like a leisure walk and a picnic.

On the second series to be held on Dec 14 at the Amphitheatre here, she hopes that it will receive the same response.

“We hope to get family participation as it is held in conjunction with family month,” she enthused.

She said the concept this time was not only to attract NGOs but to allow volunteers to bring their family members to participate.

According to her, this year, the state government had allocated RM982,000 to the Welfare Department as grants for registered voluntary welfare bodies or organisations.