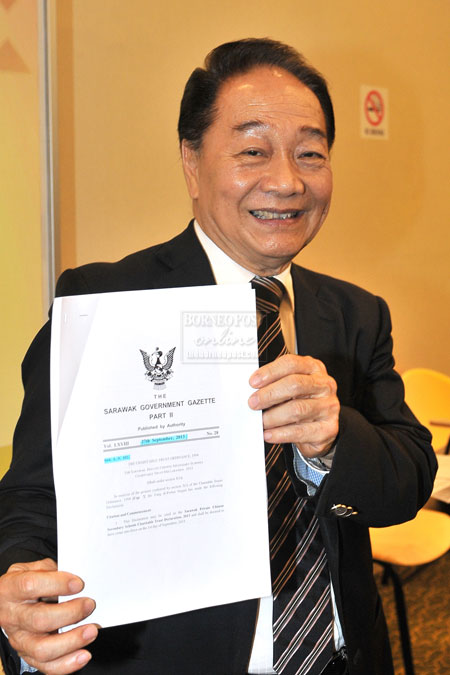 Local Government and Community Development Minister Dato Sri Wong Soon Koh said the Land and Survey Department was ready to issue land title of 2,000 hectares to the charitable trust, which will be the receiving body of the land.

“I suppose the land is ready long time ago but the state government wants to make sure that the receiving body is a deserving body so it was proposed by the government that a charitable trust fund be set up,” he told a press conference yesterday.

Wong, who is the Minister in charge of Chinese education, however, said he had no idea on the location of the land.

He said the decision by the state government to grant land to the charitable trust would certainly help the Chinese independent secondary schools.

“They will of course try to (use the land) to generate fund but we will just leave it to the appointed committee,” he added.

Wong was glad that after waiting for about a year for the declaration to be gazetted, it was now finalised.

Meanwhile, he clarified that with the amendment to the Local Authorities (Amendment) Ordinance 2013 Bill to increase the maximum number of councillors from 24 or 25 to 30, the state would have 720 councillors and not 1,120 as reported.