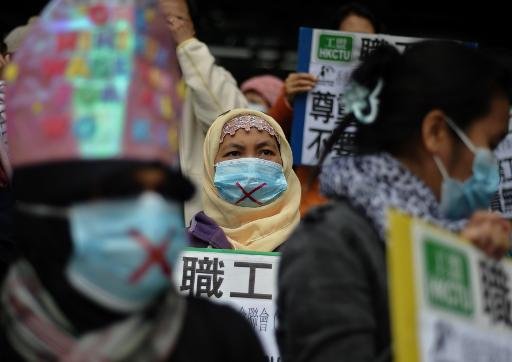 Its report, “Exploited for Profit, Failed by Governments”, comes just weeks after a Hong Kong couple were jailed for a shocking string of attacks on their Indonesian domestic helper, including burning her with an iron and beating her with a bike chain.

Amnesty found that Indonesians are exploited by recruitment and placement agencies who seize their documents and charge them excessive fees, with false promises of high salaries and good working conditions.

“From the moment the women are tricked into signing up for work in Hong Kong, they are trapped in a cycle of exploitation with cases that amount to modern-day slavery,” said Norma Kang Muico, Asia-Pacific migrants’ rights researcher at Amnesty.

The report accuses both Indonesia and Hong Kong of “inexcusable” inaction.

“The authorities may point to a raft of national laws that supposedly protect these women but such laws are rarely enforced,” said Muico.

Hong Kong is home to nearly 300,000 maids from mainly southeast Asian countries, predominantly Indonesia and the Philippines, with growing criticism from rights groups over their treatment.

Amnesty’s report says two-thirds of those interviewed had endured physical or psychological abuse.

“The wife physically abused me on a regular basis. Once she ordered her two dogs to bite me,” one 26-year-old woman from Jakarta said.

“I had about 10 bites on my body, which broke the skin and bled. She recorded it on her mobile phone, which she constantly played back laughing.

“When one of the dogs vomited, she forced my face down to the vomit, ordering me to eat it, but I refused.

“When I asked her why she kept abusing me in this way, she told me that it was because she was bored, so this is how she passed the time.”

Another told of how a male employer “smacked and punched” her until she was “black and blue all over”.

A third of those interviewed were not allowed to leave their employer?s house and many faced physical and sexual violence, lack of food, excessive hours — 17 hours a day was the average among interviewees — as well as underpayment.

Government-licensed recruitment agencies in Indonesia “routinely deceive women about salaries and fees, confiscate identity documents and other property as collateral, and charge fees in excess of those permitted by law”, Amnesty said.

Domestic workers are legally required to live with their employers and are “tightly controlled by their local placement agency and often by their employer” the report said.

They are afraid to speak out, fearing their contracts will be terminated, in which case they have to leave within two weeks, or the agency demands another recruitment fee.

A senior Indonesian labour official said new regulations had been introduced in April aimed at improving the welfare of migrant workers in Hong Kong.

“The magnitude of the problem is very big. There is under-capacity in terms of having to deal with millions of workers abroad, with hundreds and thousands of problems,” said HRWG executive director Rafendi Djamin.

Eman Villanueva, spokesman for the Hong Kong-based Asian Migrants’ Coordinating Body, told AFP: “The Hong Kong government…creates the message that foreign domestic workers are excluded from Hong Kong society and that we are like disposable goods.”

Amnesty said its findings were based on interviews with 97 Indonesian migrant domestic workers and were supported by a survey of nearly 1,000 women by the Indonesian Migrant Workers Union.

Hong Kong’s labour and immigration departments both said they were unable to comment immediately.-AFP