Wednesday, December 2
You are at:Home»Features»Chilling reminder of Holocaust 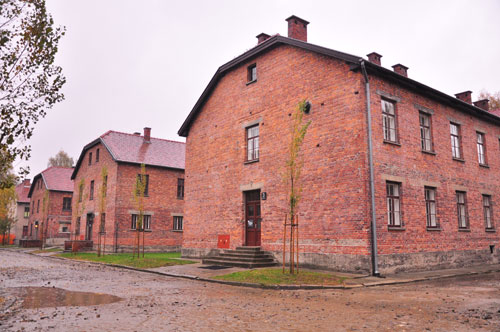 INHUMANE HISTORY: The red-brick buildings within the concentration camp had served different purposes during the Holocaust. 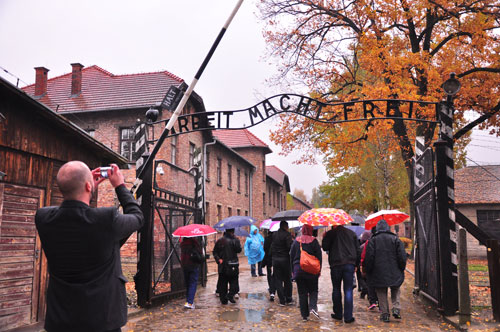 GATEWAY TO HELL: Tourists entering the main camp Auschwitz I on a rainy autumn afternoon.

IT was a rainy autumn afternoon when the coach bus entered into Oswiecim, some 311km from the Polish capital of Warsaw. The bus was heading towards the town’s most notorious landmark.

We were entering Auschwitz Concentration Camp and as the bus pulled in at the main reception building, I felt a deep sense of gloom. The rain did not help to lighten the mood.

I had the sudden urge to skip the tour but one could not possibly be in Poland without visiting this place of historic significance, which is also a Unesco World Heritage Site.

It was impossible to miss the largest network of concentration and extermination camps ever built and operated by the Nazis during the Second World War.

With visitors’ procedures quickly done, each participant in the guided walking tour was equipped with a headset. We tuned the receivers to our designated guide to test the earphones. Her voice piped through loud and clear and soon we were on our way.

Outside, the rain had not stopped and people were using umbrellas and raincoats. It was somewhat cumbersome to hold an umbrella, my DSLR camera and trying to keep the earphones in place.

The guide took us to the entrance of the main camp — Auschwitz I. Above the gate was the slogan Arbeit Macht Frei (work sets one free). I thought the slogan was sheer irony. It was saddening too, as those who were deported to Auschwitz could not possibly have known it was a journey of no return.

The compound of the camp has rows of red-brick buildings, each served different purposes during the war.

Our guide led our small group into Block 4. It contains the general exhibition on Extermination. There were documents, photographs and posters showing how the deportation into Auschwitz started and what happened when the prisoners reached their destination.

Even though the facts of Auschwitz are well-known and  available via books and the Internet, hearing them in our guide’s voice was a sombre experience. She was a really good narrator because I could imagine the monstrous scenes that took place as we were guided through the exhibition.

In the same block, there was a glass display case. It was filled with bales of human hair.

According to our guide, the hair was cut from the heads of victims after they were killed with Zyklon-B, the infamous cyanide-based pesticide used in the Nazi gas chambers. The hair was then sent to factories to make into various products.

It was sickening to learn that the huge amount of hair displayed in this room was only a small segment recovered after the liberation of the camp. Looking at what were once human locks, I could feel a shiver that had nothing to do with the chilly late afternoon. It was certainly an unforgettable sight. 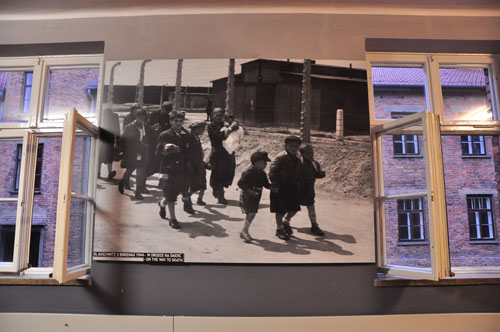 GLIMPSE INTO THE PAST: Children were not spared from the horrors of the concentration camp.

The next block that we went to was Block 5 with exhibits devoted to the Material Proofs of Crimes. There are rooms after rooms of glass display cases, containing personal belongings of victims. It was overwhelming to see the mountains of shoes in one display case and the mountains of artificial legs and crutches in another.

It was a fast-fading afternoon but our tour had yet to conclude. It was nearly dark when we were in Block 11, the former detention ward within Auschwitz I. Prisoners who supposedly committed serious offences against the Third Reich were brought here. Just outside the block was the Black Wall where the offenders faced a firing squad.

The guide led us down to the basement where former prison cells, starvation cells and standing cells are located.

The first trial use of Zyklon-B took place in these prison cells. Prisoners were shoved into the cells and gassed. Each of the wooden cell doors has a peephole and out of curiosity, I tried peeping into a cell. I saw only darkness. Then I remembered that the cells are in the basement and I gave myself a mental kick for that oversight.

Being preoccupied with that, I failed to notice that the group had moved ahead. I only realised it when my headset could no longer pick up the voice of the guide. There were scratchy noises over the receiver, which I blamed on the rain outside.

I caught up with the group in the former standing cells which were reconstructed for tourist viewing. Up to four prisoners were forced to crawl into a cell through a tiny door and forced to stand up the whole night as there was no room for lying or sitting down.

In the morning, they were taken out for a day of hard labour. 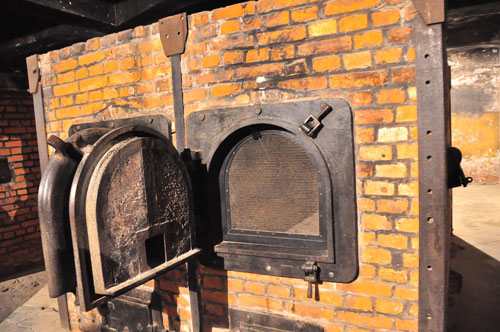 GRISLY: The ovens used for cremation.

There was a slight stench in the air, the indelible stench of fear and death, in the stifling basement that had witnessed too much inhumanity. Quietly, we left the building.

It was already dark outside and the street lamps were on, casting eerie shadows on the pavements. However, we had one more stop, which was the crematorium with its adjoining gas chamber.

It is worth noting that the building had been reconstructed after the war and the layout is a little different from the original. In fact, there is a long standing debate going on about the morality of post-war reconstruction efforts at the site but that is a different story altogether.

We were ushered through the original front door, the same door that prisoners once entered and never made it out. I had instant goosebumps the moment I stepped in.

The first room we saw was the gas chamber where unsuspecting victims thought they were being prepared for a disinfection shower. On the ceiling were holes where Zyklon-B gas pellets were released into the chamber. In concentrated amounts, death was almost instant. In insufficient amounts, death was slow and torturous.

We were shown the cremation ovens in the next room. At a glance, they looked like pizza ovens. Chagrined by the inappropriate comparison, I reminded myself that thousands of dead bodies had been incinerated here. The mental image that followed the self-reminder nauseated me. I did not want to stay in the building any longer and made my way towards the exit, which was where we entered. 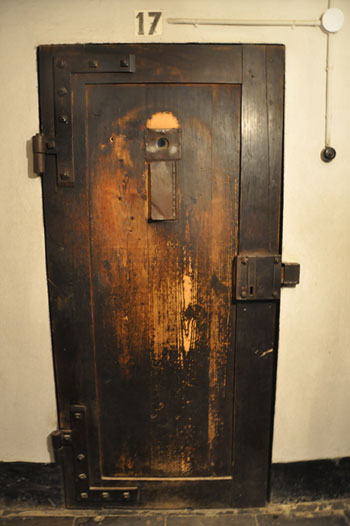 DEATH CELL: Prisoners were once gassed to death in Block 11 cells like this one.

Our tour of Auschwitz I concluded as we made our way towards the main reception building. It was already closing hour.

Walking past the blocks of buildings, I noticed how quiet it was. These buildings served a gruesome past and had witnessed atrocities committed by human beings on fellow human beings for some misguided socio-political ideology.

Auschwitz, in all its Holocaust gloom, must never be forgotten by the world. It is a chilling but necessary reminder of an evil that must never occur again, although looking at what is happening around the world today, humans clearly have not learnt from history.

It may not be a very pleasant programme to include into one’s holiday itinerary but a visit to Auschwitz will be a very worthwhile experience. Also, those keen to make the trip should not be deterred by the fact that Auschwitz is listed among the world’s most haunted places.