Friday, August 14
You are at:Home»News»Sarawak»Police call for surrender of homemade shotguns 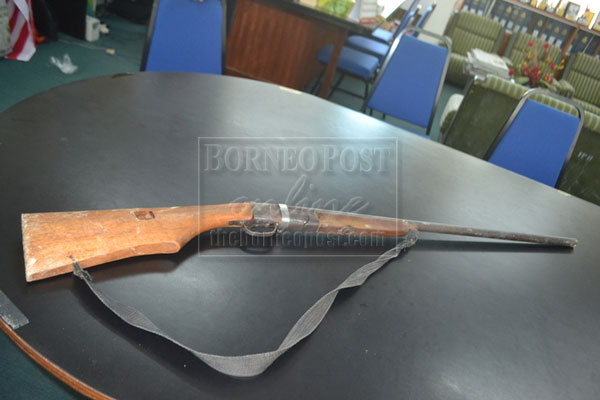 HOMEMADE: A seized bekakok is seen at the police station.

KAPIT: Police here are calling on the public to immediately surrender their homemade shotguns or bekakok.

Kapit police chief DSP Entusa Imam warned that anyone found illegally in possession of bekakok would be charged under the Firearms Act 1960.

“Once you surrender the homemade gun to the police, I can assure you that the police would not take any action against you, but once you are caught having in your possession the homemade gun, then you will be in big trouble and the penalty includes eight years’ imprisonment,” he warned yesterday, when commenting on the shooting at Rumah Sait, Sungai Pulo on Saturday.

He pointed out that it is difficult to identify between real shotguns and the homemade bekakok.

“From a distance they look no different, but under close examination you can distinguish them,” he said.

In the shooting incident, a passer-by was shot dead when he tried to stop an argument between a man and his son-in-law.

Meanwhile, Entusa called on the local community not to be scared of the police but to work together with them to fight crime.

“Through this programme, we try to make a difference to reach out to the rural community at longhouses to raise awareness of the police’s role in looking into their security and safety.

“There should be no barrier between the police and the people especially towards prevention of crime.

“Normally the community is generally scared of the police. Now we go to the ground so that the people will not have any barrier with the police.

“Through such an approach, it is hoped that the people will willingly come forward to provide information on any suspicious character or criminal activities in their respective areas,” he said.

Previous ArticleSoon Koh: Ministry will not rest on its laurels
Next Article Drug mules remanded another seven days