Friday, January 21
You are at:Home»Business»UCSI opens new frontier with an eco-hotel at The Isthmus 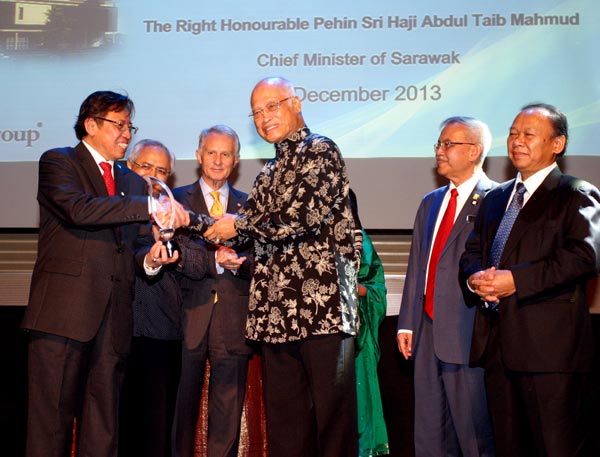 APPRECIATION: Dr Rahman (third right) hands over a souvenir to Johari (left) during the launch of the ground breaking ceremony of UCSI Hotel Kuching. Looking on are (from right) Nansian, Talib and Curtis. — Photo by Jeffery Mostapa.

KUCHING: UCSI Group is expanding its operations with the construction of an eco-hotel which, once completed, will serve as a new iconic landmark in the city.

The new 15-storey hotel with 168 rooms, named UCSI Hotel Kuching, located on the banks of The Isthmus confluence will have green features and will be certified with Green Building Index (GBI).

“The hotel is built with green sustainability in mind, covering a total build-up area of 3.23 million square feet on a 2.5 acre site in Kuching’s new central business district.

“It complies with GBI accreditation standards and its design seeks to blend in with nature.

“The hotel’s artistic external fins minimises solar gain while its cavernous lobby utilises river water to lower temperatures by around two degree on any given day.

“This reduces the dependency on air-conditioning while an efficient rain water harvesting system reduces the usage of treated water at the hotel,” he said in his speech before the ground breaking ceremony of UCSI Hotel Kuching on Thursday night at Borneo Convention Centre Kuching (BCCK).

He added that the ground breaking ceremony also adds to UCSI Group’s many milestones in Sarawak.

He pointed out that among the most significant one is UCSI’s involvement with the Economic Transformation Programme (ETP) which had led to the establishment of UCSI University’s Sarawak campus in 2010, offering tourism and hospitality education.

He believed that the new hotel would enhance Sarawak’s tourism cluster and the group was delighted to foster greater relationship with the state. In addition, Dr Rahman said the new hotel would also serve as a training ground for its hospitality students to learn more about the tourism industry in the state as Sarawak is a state of biodiversity.

He revealed that the hotel is expected to cost around RM120 million to RM150 million.