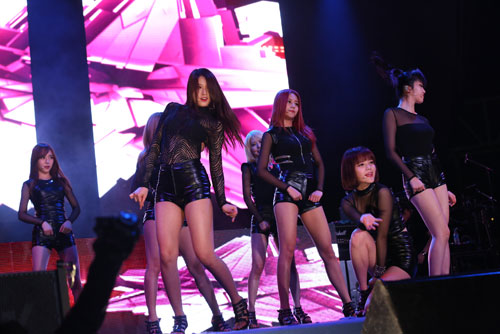 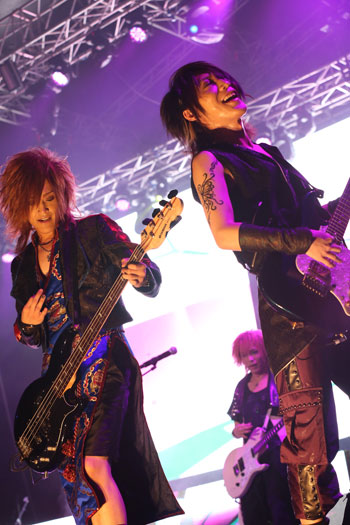 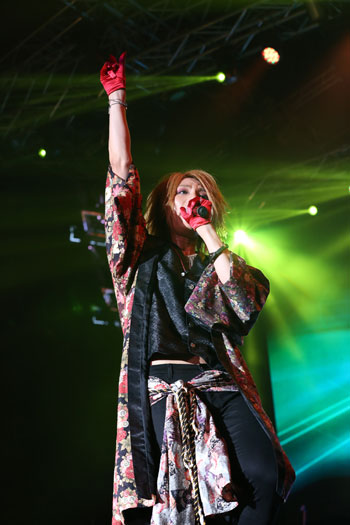 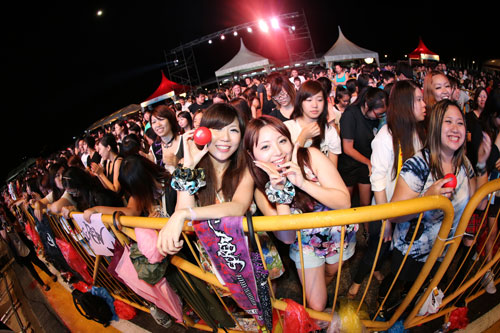 GIDDUP: Fans doing what they do best – rooting for the performers.

YEARNING — an intense or overpowering longing, desire, need or craving — as described by the Collins English Dictionary — Complete and Unabridged.

This was how I felt, writing this after attending a music festival in Singapore. Funny I should feel this way as I did not suffer the same post-travel yearning following a previous trip there three years ago.

Perhaps, it was because my trip to the city state was not the same as the one before. This time around, it was a working trip the first time — to cover a music festival billed as Sundown Festival.

Covering one of Asia’s music extravaganzas was scary enough but the thought that three more nations — the Philippines, Thailand and Indonesia — had been added to the cast just upped the ante that bit more.

On the day of the Festival, I arrived at the F1 Pit at Marina Promenade which had been specially designed for the event, and I couldn’t help but marvel at how scenic the stage looked with the Singapore Flyer (Lion City’s version of the London Eye) and the island state’s horizon as backdrop.

Loud thumping music, courtesy of a DJ, helped to prep festival-goers before the concert as did the side acts and cultural performances, featuring the barong (an Indonesian story-telling dance form), muay thai as well as a performance by the Tinikling B-boys, mixing traditional Philippine pre-Spanish bamboo pole tap dancing with a modern twist of breakdance.

As I still had some time in hand before the concert, I decided to test my taste-buds at the ‘food street’ set up for the Festival — courtesy of Singapore food portal Hungrygowhere.com.

It was interesting to note the food stalls featured cuisine from all the nations participating in the concert — Korea, Thailand, Japan, Indonesia, China, Hong Kong, Taiwan and the Philippines.

Some of the more widely known foods were also featured such as Taiwanese bubble milk tea and sausages, and Indonesian curry and soto, but what caught my eye was a stall selling Taiwanese bear-paw buns.

These cute-looking munchables were not only shaped like bear paws but looked like yummy burgers as well. Although the fillings were usually fried chicken, spiced up with a variety of sauces, one special thing this store did was giving the bear paws a tropical makeover by introducing a gelato filling instead — something unconventional for a hot day.

At last, just as the sun was setting, the concert began. With the friendly and entertaining emcees from KissFM engaging the crowd, the first act begun with the Filipino rock band Rocksteddy.

With steady (pun unintended) drum beats and guitar riffs, the once Christian-rockers-turned-alternative-rock group hyped up the crowd with songs like Superhero, Love Is Your Bullet and the slightly mellower Drown.

They then gave way to Thai self-described PopPunk group No More Tear which resembles a Thai version of Paramore with the feisty front-woman’s flame-tinged hair. For me, this group was quite the understated group and definitely took me by surprise when I did listen to them. Even though I don’t understand a word of Thai, the emotion portrayed through the songs — Don’t Have Tears and Effort — resonated through, and I was pleasantly surprised when FukFang displayed her chops through a rocked-up version of Lady Gaga’s Bad Romance.

Adonia Shao, girl wonder from China, displayed her new electronic-dance inspired tracks, and Nidji brought a mix of rock and electronic music to the Festival which refreshed the lineup and kept the crowd going throughout the night.

Cantonese actor and singer Bosco Wong regaled the crowd, proving himself to be quite a fan favourite among Singaporeans.

Rico Blanco amazed with his powerful vocals and incredible stage get-up, briefly transforming the stage into something out of a technicolour Amazon jungle.

Halfway through, festival-goers were granted a brief respite from upbeat rock by Yoga Lin who performed some acoustic songs before bringing the hype back up again.

Kpop group AOA brought a sugary sweetness to the show, mixing it up with a band performance with their new song Moya before transforming into their dance unit and sending screaming fans into a rocking frenzy with slick dance moves to the tempo of songs “Elvis” and “Love Is Only You” before showing off their sophisticated and mature side with Confused.

Of all the concert’s visual impacts, nothing could beat visual-kei groups — SCREW and D=OUT — from Japan with their amazing stage costumes and makeup. I found it interesting that despite both being visual-kei bands, it was almost as if SCREW were the ‘shadows’ to D=OUT’s light as the former’s music was slightly darker and edgier while the latter had some catchy and upbeat tunes.

Regardless, the one thing prevalent throughout the entire Festival was the universality of music that united people, regardless of race or musical preference. This was evident on the part of the fans who fully supported all the bands even if many had no inkling of the groups and their bias towards others.

I found that beautiful to watch, and was touched because I was reminded of ibu pertiwiku Sarawak and how, despite being hugely multi-racial and culturally diverse, we still manage to make it through day after day without any major conflict.

Thank you, Singapore for the humbling and unexpected life lesson and fret not I shall return.