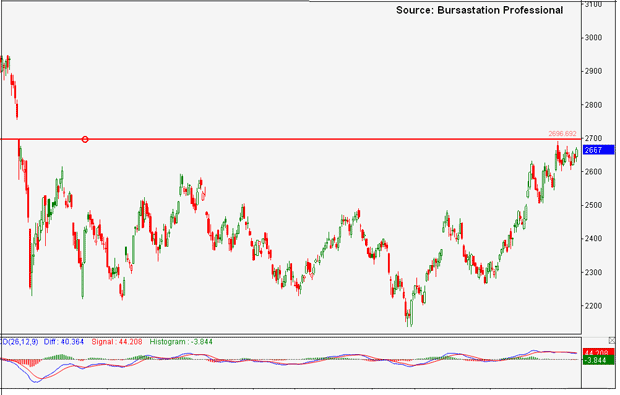 For the week, palm oil ended 0.6 per cent higher. The new benchmark FCPO December contract settled at RM2,670 per tonne on Friday which was up by 12 points from last Friday at RM2,654.

Cargo surveyor Intertek Testing Services (ITS) reported that exports of Malaysian palm oil products from November 1 to 30 fell 4.75 per cent to 1,449,664 tonnes from 1,521,928 tonnes shipped during the October 1 to 31 period.

Cargo surveyor Societe Generale de Surveillance (SGS) said on Monday that exports of Malaysian palm oil products for November 1 to 30 fell 4.87 per cent to 1,472,694 tonnes from 1,548,063 tonnes shipped during the October 1 to 31 period.

According to some traders in the Malaysian Palm Oil Association (MPOA), a group of planters forecast that the country’s palm oil output might plunge to approximately 11 per cent in November from a month ago which is far below the market’s expectations of a one per cent fall.

Earlier this week, price fell to as low as RM2,605 as investors took profit due to weak export reports but speculative buying pushed the prices back up, close to a positive level for the week.

A Reuter’s poll on Thursday showed that Malaysian palm oil inventories were likely to climb to 1.98 million tonnes in November, as an expectation of slow production only did little to offset softer winter demand for the tropical oil.

Prices mainly rose by concerns that monsoon floods in the states of Johor, Pahang and Peninsular Malaysia’s eastern coast would complicate palm oil harvesting and cause logistical problems.

Planters typically delay harvesting during heavy rains and thunderstorms, as fruits that have to be immediately transported to mills got stuck on flooded roads which also reduced their quality.

Ringgit weakened throughout the week until the highest at 3.2325 as concerns on the Federal Reserves might start its tapering programme might happen sooner than expected especially with the improvement in the US economy.

Normally, a weaker ringgit will increase demand from foreign buyers as they have to pay lesser to purchase palm oil.

However, price managed to bounce to the 2,670 level which we believe that price may retest the 2,692 level in the coming trading days despite trading in a sideway trading range as investors are awaiting for further industry report.

We also draw a strong resistance line (red horizontal line) where should price managed to break and close above it, price may stage another extension of the current bull run.

Failing to do so, price may enter back into the sideway trading range albeit bias to the bullish side.