Saturday, September 26
You are at:Home»BPOnline»Friendship Bridge a symbol of close M’sia-Brunei ties 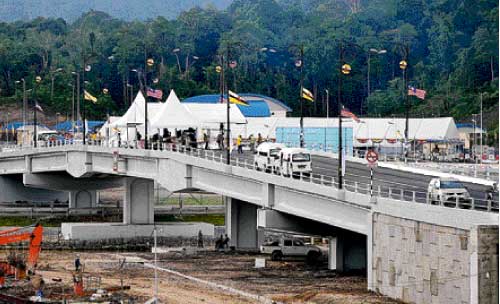 OFFICIAL OPENING: A side view of the Friendship Bridge which was opened yesterday. – Bernama photo

He said the bridge would also help further strengthen ties between the two countries in the future.

“I wish to put on record how proud Malaysia is on the opening of the  Malaysia-Brunei Darussalam Friendship Bridge yesterday. This is the first bridge to be built jointly by the two countries and it is  also a reflection of the close relationship between the two countries,” he said.

Najib told this to Malaysian journalists after he and Sultan Hassanal Bolkiah of Brunei Darussalam signed a plaque and cut a ribbon in a symbolic gesture to open the bridge at Kampung Ujong Jalan, Temburong near here. The bridge goes across the Pandaruan River and connects the Limbang Division in Sarawak to the Temburong District in Brunei Darussalam.

According to Najib, the bridge was built after both countries agreed to share the cost equally to facilitate the people in Temburong District in Brunei and Limbang in Sarawak in going to and fro on their daily business.

He said with the existence of the bridge, they needed only a few minutes to cross Sungai Pandaruan. In the past, residents in the two areas had to spend at least two hours to cross the 60-metre wide river by ferry.

Najib said the construction of the bridge would also have a long term impact in the generation of cross border trade which would spur the socio-economic development of the people especially in Limbang and Temburong.

He said the bridge was also beneficial to the tourism industry of both countries because an estimated 100,000 citizens of Brunei visited Sabah and Sarawak each year.

“Malaysia is very happy with the current bilateral relations which is moving positively forward in all aspects. The bridge, other than connecting the peoples of both nations also reflects further the friendliness and close ties following the signing of the Exchange of Letters (EOL) in March 2009,” he said.

According to Najib, the bridge was among the important components in the Pan Borneo Highway connecting Sarawak and Sabah through Brunei.

With the completion of the bridge, ferries will no longer be used on the route.

Najib said in the context of Asean connectivity, the bridge was also in line with the spirit of realising the vision of the Asean Community in 2015.

On the issue of passports of citizens of both countries travelling between the two nations being stamped eight times by the immigration departments of Malaysia and Brunei, Najib said it had been resolved in October.

Commenting further on the close Malaysia-Brunei ties, Najib said: “Very good, very comfortable. Both governments will strengthen further this good relation as we have agreed to the principles based on EOL which had been signed between both countries. Now we are implementing certain provisions (in the EOL)”. — Bernamatwo to three tonnes of rice per hectare next year.