Tuesday, October 20
You are at:Home»News»Sabah»Solar, wind energy can change power generation in Sabah 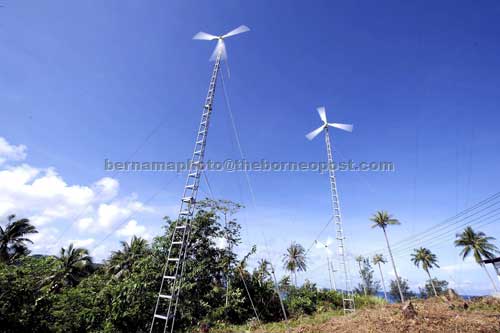 KUDAT: Renewable energy from solar and wind turbine is not only an excellent power alternative for the future but it can also revolutionise electricity generation in Sabah, says Science, Technology and Innovation Minister Datuk Dr Ewon Ebin.

He said Sabah had its own uniqueness as it endowed was rich natural resources which could be used to generate renewable energy and contribute to economic development.

“Operational cost for power generation is extremely high and power producers like Sabah Electricity Sdn Bhd face a great challenge and the problem  has been further aggravated by the inconsistent hike in fuel prices.

“As such, the government always welcomes any party that can come foward to explore and apply green energy and simultaneously support the government’s move to develop sustainable energy,” he said when launching two TechnoFund Mosti projects here yesterday.

The projects, the Application of Wind Technology System for Energy Generation and the Sustainable Thin Film PV Building and the Renewable Energy Generation, have been entrusted to Sirim Bhd by the Ministry of Science, Technology and Innovation for research and development.

Overall, the projects can generate 25 kw of wind turbine power and 9.8 kw of solar energy.

The power generated can light up a resort near the project site in Tg Simpang Mengayau and can be supplied and stored in a battery system.

Ewon said the research findings can be developed on a large scale, commercially, and can contribute towards reducing the number of power interruptions in Sabah.

It can also bring cheer to the many rural residents who live far away from grid areas.

In the long-term, renewable energy can become a big alternative to the current practice of generating electricity from fuel oil, charcoal, diesel and  hydro reservoirs which incur huge operational costs.

TechnoFund is a grant scheme funded by Mosti which covers 13 projects under the Renewable Energy Task Force.

Established by the Cabinet, the scheme provides funding for technology development, up to pre-commercialisation stage, with the commercial potential to create new businesses and generate economic wealth for the nation. — Bernama