Thursday, August 18
You are at:Home»News»Sarawak»RTM still relevant despite the Internet – Political secretary 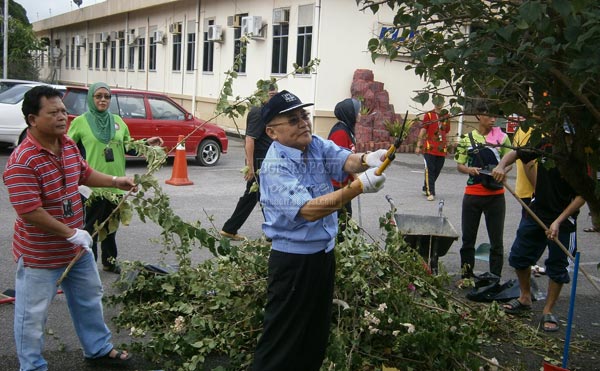 LEADERSHIP BY EXAMPLE: Abu Seman (right) trims the branches of a tree while Albert (left) and his staff help in cleaning the compound of the RTM premises.

SIBU: Radio Television Malaysia plays a bridging role between the government and the people by disseminating information on government policies and development projects.

A political secretary to the Chief Minister, Abu Seman Jahwie, said RTM was still relevant despite the advent of the Internet.

“People need information to keep themselves updated with the rest of the world,” Abu Seman, who is also Jemoreng assemblyman, said.

“So far, RTM is doing well and I hope its services to rural areas can be further strengthened.”

Earlier, he attended a press conference called by RTM to announce its 30th anniversary celebration where he gave RM2,000 to RTM Sibu Recreational Club to run its yearly activities.

He said they would continue to reach out to rural communities to keep them updated with the latest information.

On the anniversary celebration, Albert said the programme would start off with ‘Panggau Krismas 2013’ at RTM open stage here on Dec 13, featuring popular local artistes such as Rickie Andrewson, Winnie Albert, The Crew and many others.

On Dec 14, they would have ‘senamrobik’ and ‘poco-poco’ at the same venue.

A cooking demonstration by Chef Jaafar Onn, a health check and a consumerism programme would also be held on the same day.

The final of the ‘Bintang Sibufm’ would be held at the same venue, starting at 7pm.