Friday, May 7
You are at:Home»News»Sarawak»M’sia to be forerunner if WHO accreditation pulls through 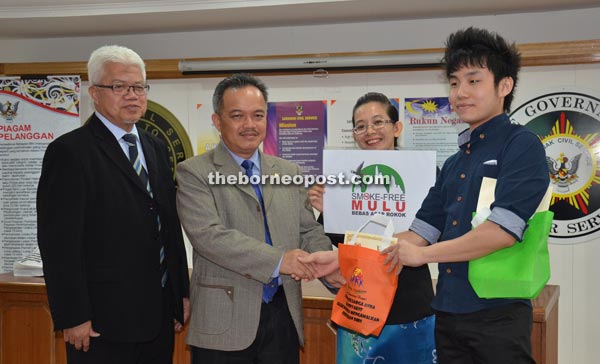 CONGRATULATIONS: Antonio (second left) presenting the prize to the grand winner, Chan Yih Cherng, in the presence of Yahya (left) and Dr Veronica.

MIRI: Malaysia will be the world’s forerunner in gazetting a world heritage site of caves and a national park if the Mulu National Park is successful in getting a smoke-free accreditation from the World Health Organisation (WHO) under the ‘Smoke-Free Mulu Heritage’ (MuHBAR) programme.

The target is to obtain the WHO accreditation by 2017.

A `smoke-free zone’ is a gazetted area where smoking is prohibited.

Mulu was chosen as it is a Unesco world heritage site famous for its caves and limestone formations, Malaysian Health Promotion Board (MySihat) chief executive officer Datuk Dr Yahya Baba said when asked by reporters here yesterday, after the prize presentation for the MuHBAR Logo Competition.

Mulu will also be the third world heritage site in the country to be a smoke-free zone after Malacca (2010) and Georgetown in Penang (2014) if the mission is successful.

This is an important programme, and we give assistance including financing the programme and we need the support of the community and the media to highlight the programme to the society,” he added.

He pointed out that to make the vision a reality, collaborative efforts need to be taken by the government, non-governmental organisations (NGOs) and private sector, as well as the state government, Health Department, Forest Department and MySihat.

The efforts will aim at creating awareness among the people both locally and internationally and at the same time empowering the local community to implement the project, adding that enforcement would be easier once the people understand.

Yahya added in the state, apart from Mulu, MySihat is also in discussion with the state government on the possibility of gazetting the Kuching Waterfront as a smoke-free zone.

They will also look into the possibility of doing the same for Mount Kinabalu – also a world heritage site.

MySihat is spending some RM1 million to implement the programme in each state including Sarawak (RM250,000 for MuHBAR), and Penang while in Malacca, they spent RM3.5 million.

Meanwhile, Dr Veronica explained that if Mulu National Park is gazetted as a smoke-free zone, the department can only enforce the law in the gazetted area but not inside residential houses or private dwelling as well as cafeterias.