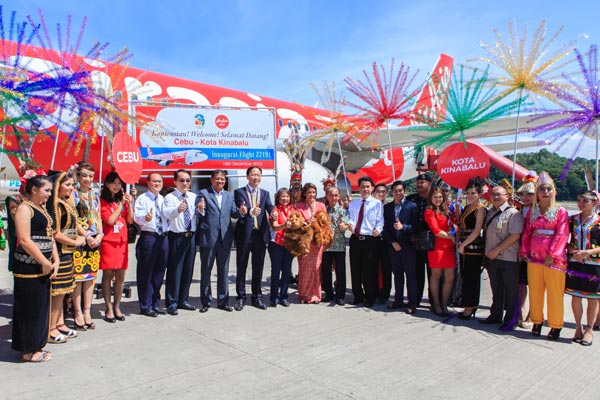 AirAsia Bhd (AirAsia) chief executive officer (CEO) Aireen Omar said, “This is another marvelous achievement and a great development for East Malaysia, following the recent celebration of the inaugural flight from Manila to Miri on December 7, the first ever route operated by any airline in the region.

“We are proud with AirAsia Zest – our sister airline – for narrowing the gap between Malaysia and the Philippines, enhancing bilateral ties between the two nations and establishing a closer relationship between both communities.”

Maan Hontiveros, CEO of Philippines’ AirAsia said, “With our new Cebu to Kota Kinabalu flights, air transport connectivity between the Queen City of the South (Philippines) and Kota Kinabalu, Malaysia and other parts of the region where many Filipinos are experiencing poor connectivity and high fares will greatly improve.”

Hontiveros, represented AirAsia Zest in the inaugural flight and arrived together with all the guests as well via Flight Z2 191.

This new route operates three times weekly on Tuesdays, Thursdays and Saturdays and in conjunction with the successful inaugural flight, AirAsia is offering promotional all-in-fares from as low as RM90 one way from today until December 29, 2013. Guests are able to travel from December 20, 2013 to February 28, 2014.