Friday, August 14
You are at:Home»News»Sarawak»Two arrested with homemade guns 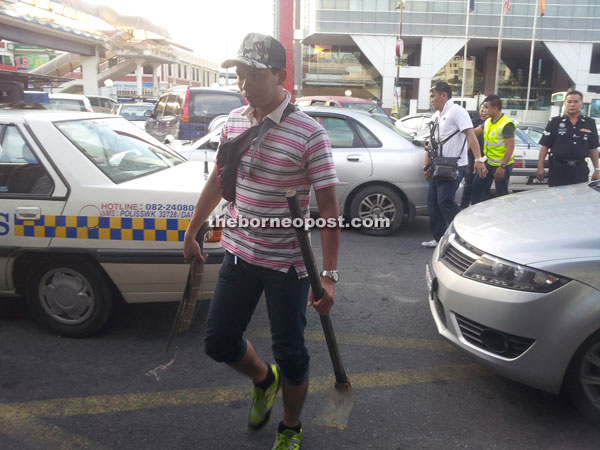 SEIZED: A CID personnel carrying a hoe and machetes seized during the raid.

In the raid held around 4pm to 6pm on Friday in Lambir, a homemade air gun and a homemade shotgun were seized from a hut where the two suspects were staying at.

During the raid, police also confiscated several items believed to be stolen, such as a kettle, a hoe and machetes.

Police are investigating the case under Section 8(a) of the Firearms Act 1960 and Section 457 of the Penal Code for house-trespassing, an offence punishable with imprisonment.

The suspects aged 18 and 21 have been brought to Miri Central Police Station (CPS) for investigation.

According to sources, both suspects were stunned upon seeing a team of police dashing to their hut, despite the area being in flood waters due to a heavy downpour the day   earlier.