Monday, August 10
You are at:Home»News»Sarawak»‘Sarawak has great tourism potential’ 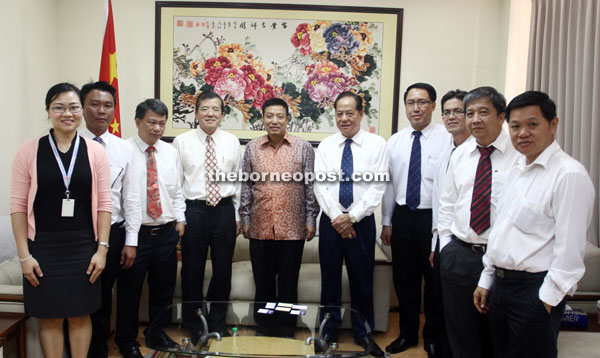 KUCHING: China and Sarawak must continue to enhance their bilateral relationship to encourage more collaboration in various areas for the benefits of both parties.

China’s consul-general in Kuching Liu Quan, who was appointed to the state in early November, said yesterday there was great potential for tourism and trade cooperation between the Sarawak and China.

“Therefore, it is important to have more exchanges and communications to open up more opportunities between our countries for further collaboration,” he said when receiving a courtesy call from See Hua Group at the General Consulate of the People’s Republic of China in Jalan Ong Tiang Swee here.

“The strategic location and natural wealth of Borneo, despite its smaller population, has a lot to offer, not only in trade and business but also tourism,” he added.

Liu pointed out that the state’s strength in the tourism was its great diversity of culture, flora and fauna backed by good facilities.

“Kuching or Sarawak as a whole has such advantages but the attractions are scattered and as such accessibility to these destinations is important,” he said.

“Also, more needed to be done to provide better facilities such as five-star hotels that offers convenience, accessibility and comfort,” he elaborated.

He pointed out that Sarawak was still unknown to most Chinese in Mainland China.

“We need to have more networking exchanges and invite more Chinese visitors here, including creating joint tour packages and products, to attract Chinese tourists,” he said.

“However, it will be better with direct entry instead of through a third country,” he said.

Liu observed that the initiative would bring positive impact on both countries as it would open up more engagements for enhancing social and economic growth as well as attract distant relatives and friends visits.

“Our aim is to provide better services to visa applicants, which has been increasing . Following the success of visa centres in other countries, the Chinese Consulate-General in Kuching then decided to introduce the counter here,” he elaborated.

On the setting up of the China consulate in Kota Kinabalu (KK), Liu said more time was needed to implement the plan.

“It is only a matter of timing but I do hope it can be set up as early as possible to provide better services and convenience for local people and Chinese nationals in Sabah. We can look forward to that next year,” he added.