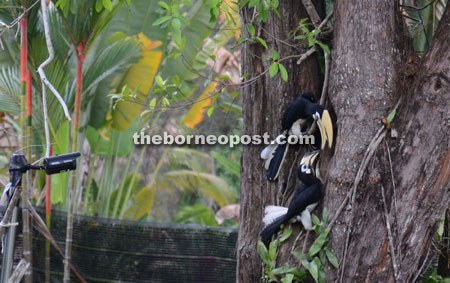 MIRI: Feeding wildlife including hornbills with food that human consume to make them healthier and have a longer life span is a misconception.

Saying this, Sarawak Forestry Corporation (SFC) honorary ranger Musa Musbah explained that feeding wildlife with what human beings eat such as bananas, meat and bread could cause them to get sick.

“Even fruits like bananas, they are sweet and repeatedly given to hornbills might cause them to have diabetes and shorten their lives,” Musa noted. 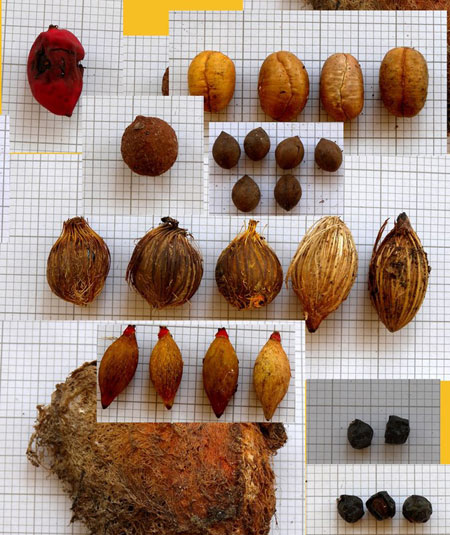 ALL NATURAL: Natural food eaten by hornbills at Piasau Camp.

He was presenting a talk on hornbills held in conjunction with an exhibition entitled ‘Enchanting Piasau Camp – A Nature Park in The City for Mirians’ at Boulevard Shopping Complex here yesterday.

Musa, also the deputy chairman of the newly registered Piasau Camp Miri Nature Park Society (PCMNPS), had been tasked by the authorities to conduct observations on the Oriental Pied Hornbills at Piasau Camp.

Hornbills are a totally protected species under the state’s Wild Life Protection Ordinance (1998).

He said equally life threatening is putting the hornbills in cages as it could cause unnecessary stress among the animals. 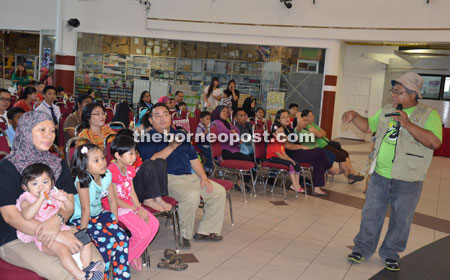 COOPERATION NEEDED: Musa fielding questions from the attendees of the talk.

Musa said another misconception about hornbill is that hornbills could die if not released from their nest inside the tree trunk.

“There was one incident of a man who chopped down the whole tree trunk believing he is saving the ‘mother’ hornbill and its offspring from being trapped inside a tree trunk. Little did he know that by doing so,

he is endangering them,” Musa said, adding that a hornbills’nestling period is about three months.

He also pointed out that hornbills mate for life and the dedicated male soul mate will feed his family throughout the nestling period. Feeding is around 5 – 21 cycles per day. As such, killing the male hornbill during this period will wipe out the whole family.

Musa called for people to give their support to protect the totally protected species to prevent its extinction, noting that in Piasau Camp, the population of hornbills is dwindling.

Studies had shown that the hornbill couple of Jimmy and Faridah had produced about 56 offspring in their lifetime.

However, he said many of the offspring could have been killed due to poaching.

Faridah was killed by a poacher in September.