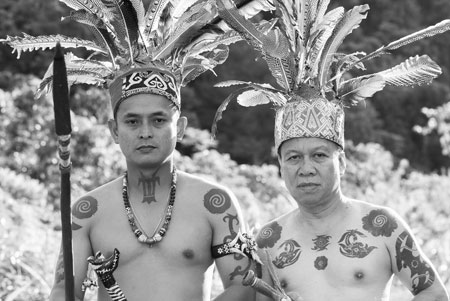 KETUAI GAWAI: Rimau (left) and Uding before the start of the Gawai Kelingkang dan Tuah.

OBSERVING a rare traditional Iban ritual to seek or celebrate good fortune called Gawai Kelingkang dan Tuah was an opportunity too good to pass up when it  presented itself about two weeks ago.

I needed little convincing when my colleague, whose relatives would be hosting this age-old  ritual at his longhouse in the interior of Kanowit, invited me to tag along. All he said was “it’s a special Gawai which will also commemorate our new longhouse – a sort of adding Gawai Pangkung Tiang in the mix. There is a special ritual where they bathe pigs in the river.”

The thought of witnessing this ritual (bathing of the pigs) got me curious. So without hesitation, I decided to make the seven-hour drive from Kuching to Kanowit – plus a boat ride across the mighty Rejang, and another hour’s drive along a mix of tar-sealed and off-road tracks to the nearest pick-up point before taking a longboat ride along Sungai Poi to our destination – Nanga Ulin. 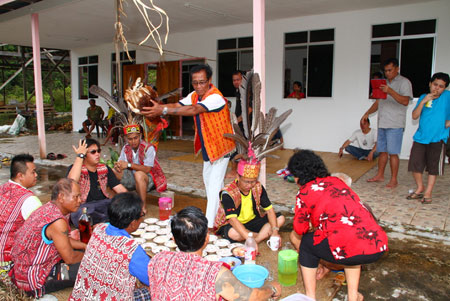 NASAK CEREMONY: The bard (holding a rooster) performing the Biau/Miau ke piring as the Gawai hosts and village elders look on. — Photos by Chimon Upon

The Gawai Kelingkang dan Tuah was to be celebrated at the newly-built 21-door longhouse called New Ulin (New Orleans inevitably came to mind). This modern structure replaces the old Nanga Ulin traditional longhouse, situated further upriver, which was gutted in 2009. Work on New Ulin (also known as Rumah Sangga) started that same year and the first family moved in two years ago (2011).

The Gawai hosts were Jackson Uding Upak, 54, a senior commissioning engineer with a multi-national company in the oil and gas industry and his brother 39-year-old Rimau Tengoling, a sub-sea engineer with a multi-national drilling company also in oil and gas. The three other individuals involved were the duo’s children and a brother-in-law. In all, there were five hosts.

“In the old days, Gawai Kelingkang was celebrated to prepare or mark the success of the notorious Ngayau (headhunting) tradition, but today, the Ibans celebrate this ritual as a symbol of good fortune and success in their Bejalai (sojourn) undertakings, mainly in search of jobs and higher education.

“In this Gawai Kelingkang today, we celebrate our new home and the successes of some of our fellow longhouse residents,” Uding told thesundaypost at the celebration.

He noted that the ripih could be different in other areas. For instance, at New Ulin, the Gawai, which took place on Dec 11, was celebrated in the Nyingka stage. 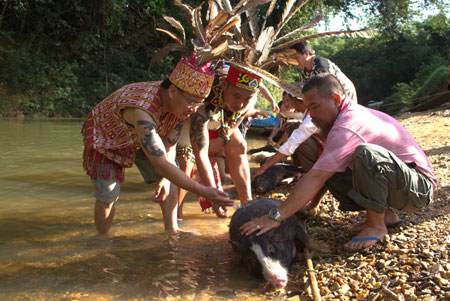 SACRED: No one is allowed to go into the river during the bathing of the pigs ritual except for those involved.

Preparations for Gawai Kelingkang dan Tuah started on a Tuesday evening as village elders and the Gawai hosts took part in Nyambut Orang Nasak, a ceremony to herald the arrival of the Pugu Berani (the most important and wisest person) to the celebration.

During the Nasak, the Gawai hosts acted symbolically as the Pugu Berani. On arrival at the foot of the longhouse, each was presented with rice wine to “drown any bad omens” that they might have caught on their way to the celebration.

As chief host, Uding was required to symbolically chant an invocation.

At the end of the ceremony, the men proceeded to build an offering hut for the sacrificial boars, and a shrine at the gallery for the Bilik (household unit) of the hosts. A flag pole was also planted where offering baskets for the spirits were placed on top.

At 9pm, the bard started the Nimang Pantar (chanting ritual) ceremony by performing invocations of his guardian spirits. He began with the Ngerayong Pandong ritual (covering the shrine with Pua Kumbu) before the chanting ritual with his two bala (assistants) who acted as Penyaut Lemambang or Nyagu (answering poetry-like chants sung by the bard).

The bard led his two followers in chanting a ritual song called Ngerara Rumah. They recited the reason why the longhouse had been prepared for the festival. The bard carried on chanting along the longhouse gallery until midnight, calling on the Sengalang Burong (spiritual beings) and Orang Panggau Libau (spirit chiefs) to attend the feast.

After the Nimang Pantar, the celebration continued with an all-night karaoke session and merry making. 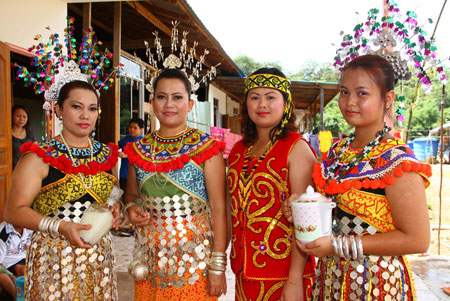 NYAMBUT ORANG NASAK: These women getting ready to welcome the Pugu Berani.

Wednesday started early for the longhouse community as they prepared to celebrate Gawai Kelingkang dan Tuah. Five sacrificial pigs – one for each of the hosts – went through a Nyugu Babi (combing the fur) ritual where rice wine was served and blessings offered before the porcine herd was led in a procession to the river for the bathing ceremony. No one, apart from those involved in the ritual, was allowed to go into the river. This was to avoid bad omens.

After the bathing, the pigs were fed, combed and carefully placed in a specially-built hut until their sacrifice at the end of the Gawai. Another ritual offering hut was built at the gallery of the Ketuai Gawai (chief host) to place a sacrificial Tuah (luck) pig.

The six pigs, including the Tuah, would be sacrificed for their livers and these, in turn, would be divined by experts.

The livers of five of the pigs would indicate the luck (health and prosperity) of the hosts while the Tuah would represent the Bilik.

After the morning ceremony, three gunshots were fired to symbolically announce to the nearby longhouse communities that Gawai at New Ulin had begun.

Before the guests arrived, the longhouse folk took part in the Ngetas Pintu ceremony to “officially” open the door of the bilik ketuai gawai to guests, and invite the Sengalang Burong to descend from the sky and the visitors from Panggau Libau to a feast. Throughout the afternoon, the hosts entertained visitors, relatives and friends from villages near and far.

In the evening, led by Uding and Rimau, the five hosts embarked on a Ngerandang (making a safe passage) ritual at the longhouse gallery. This ritual is important to set a “path” for the bard and his assistants to conduct their Timang Kelingkang so that the spirits would not be disturbed.

Symbolically, the Ngerandang ritual was conducted to celebrate the successful careers of the hosts, particularly Uding and Rimau. In the old days, it celebrated a successful headhunting trip (conquering of the enemy).

Around 9pm, the bard and his troupe started the Timang Kelingkang which lasted till the next day. Throughout the night, the five hosts were not allowed to fall sleep for fear their absence during the ritual might affect the livers of the sacrificial Kelingkang pigs. The Timang was meant as an offering to the gods for prosperity and health.

According to old traditions, amulets and offering plates were placed at a Kelingkang (shrine).

Around 1am, the hosts took part in a Ngerampas ritual where they carried a coconut as a symbolic replacement for a smoked skull/head. The bard continued with his Timang Kelingkang until 7am, proceeding with the Ngelampang (cutting of the head) ritual. Here, Uding was tasked to cut the coconut.

The Bertama Tuah took place at the house of the hosts on Thursday morning. All the longhouse folks were invited to attend – and breakfast was served. Before entering the bilik, guests were required to throw a coin into a jar for luck and prosperity. A miring (offering ceremony) for blessings from the spirits and to show the intent of goodwill of the longhouse community, was then held.

Subsequently, the pigs were sacrificed, starting with the Tambak Bulu where a string of thread was sewn onto the Baju Burong of each of the five hosts. Eight women were needed for the task.

“Fortunately, all the pigs provided good omens, otherwise, we might have to repeat this whole Gawai process,”  Uding said with some relief.

The bard and his assistants continued with the Ngading Kelingkang until 3pm where Gawai Kelingkang was adjourned. In the evening, the Mupu Buluh Rapuh was held where the longhouse folks donated various food and jungle produce for dinner at the host’s bilik.

Those present during Gawai Kelingkang dan Tuah were not allowed to wear black so as not to create a sorrowful atmosphere and offend visitors from the Panggau Libau.

Those in mourning cannot be involved in the various ceremonies. Moreover, no one is allowed to get into any argument. Negative and ill feelings must also be put aside under all circumstances.

Rimau explained all these could reflect the “divining” outcome of Gawai Kelingkang dan Tuah.