Thursday, August 13
You are at:Home»News»Sarawak»Azreil gets new Perodua Viva before his licence 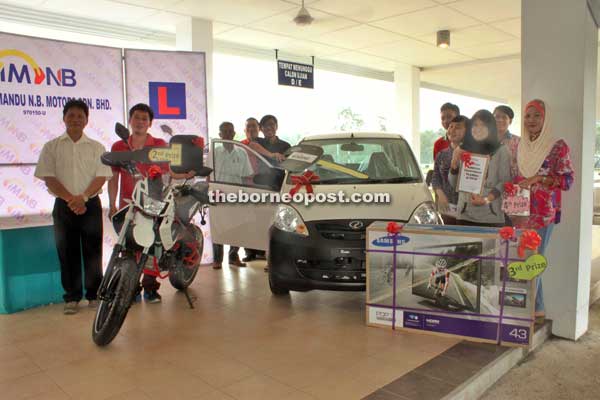 KOTA SAMARAHAN: When Azreil Mirzza Iskandar signed up for a driving course at Institute Memandu NB Motors Sdn Bhd (IMNB), he never guessed he would be the proud owner of a brand new Perodua Viva – before even getting his licence.

The 18-year-old was named winner of the grand prize to IMNB’s opening promotional lucky draw, which kicked off when the school opened at Kota Samarahan on Dec 26.

According to the driving school’s general manager Aaron Chong, they received over 1,000 entries from students who enrolled for courses.

“They qualify to join (the lucky draw) when they sign up for any of our courses, whether it’s motorcycle, car, lorry, trailer, bus, or Class B licence,” he told reporters yesterday at the prize-giving ceremony held at their centre.

IMNB managing director Datuk William Ngu Ung Wei, who is also a co-founder of NB Group of Companies, was also present at the prize-giving.