Wednesday, June 16
You are at:Home»News»Nation»Nazri: VMY preparations not affected by planned rally 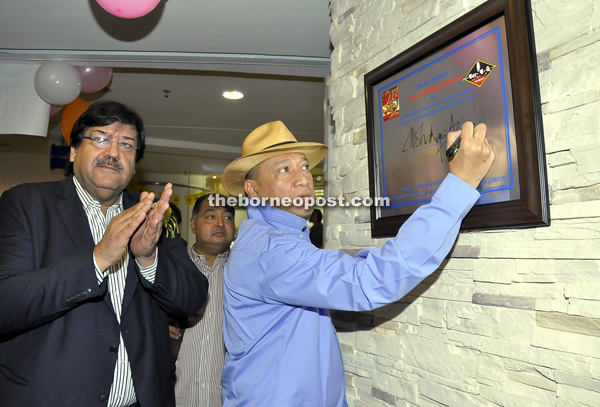 IT’S OFFICIAL: Nazri signs the plaque during officiating the opening of the franchaise. — Bernama photo

KUALA LUMPUR:  The Visit Malaysia Year (VMY) 2014 preparations have not been affected by the planned anti-government  rally on  new year’s eve as foreign tourists have always held the country in high regard, said Tourism and Culture Minister Datuk Seri Mohamed Nazri Abdul Aziz.

“Anyway, foreign tourists wishing to visit Malaysia next year had made advance bookings.

“As Malaysia is noted for people who can speak English, and who are friendly and helpful. These features have become tourism attractions and made Malaysia well known,” he told reporters after opening  the  Bar.B.Q Tonight Restaurant here yesterday.

Describing the planned rally as childish as it is aimed at undermining harmony, he said the people were fed up with the opposition’s antics of finding fault with the government and inciting them to take to the streets.

“As they are at it every now and again, the people couldn’t care less now.

“This is a childish behaviour. I think the majority of Malaysians are already bored with this childish act.

“The general election is already long gone, and the losers had been decided.

“The world has seen what had happened to Egypt, Syria and the latest in Thailand.

“I do not think the people want the same situation to occur in Malaysia,” he added. — Bernama