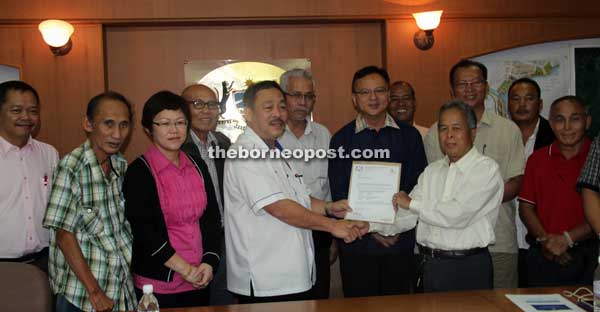 HANDING OVER: Sagah (fifth left) presents the official handing over letter to the committee led by Awat. Also in the photo is Lo (sixth right).

KUCHING: Those loving adventure and nature should consider visiting Gua Raya, a cave situated between the villages of Skuduk and Chupak off Mile 23, Kuching-Serian Road, one of these days.

This is because the cave now has proper walkway and fenced up parking area, which was recently completed with funds from the Ministry of Tourism.

MPP chairman Lo Khere Chiang said the Skuduk-Chupak Recreational Park is a unique area as the attraction is not just limited to the cave, but also the surrounding padi fields which both Skuduk and Chupak are known for.

“I have been there few times, with friends from abroad, and they were attracted by the cave, padi fields and the nearby man-made lake.

“A friend from Singapore even plucked padi and posted the photo on Facebook.

“There is so much potential there, and good business opportunity. In China, the tourists even pay to write on rocks, which shows there is a lot of possibility which we can explore there,” he said at the simple handing-over ceremony.

Gua Raya, which got its name due to its big space inside, is still unknown to many due to lack of publicity on it.

Word has it that it was once used as hiding place during Communist Insurgency, and there are many historical facts yet to be uncovered.

Though the cave has been explored, much of it and surrounding vegetation have been left undisturbed and maintained in its original state. There are also many interesting rock formations inside the cave.

The Tourism Ministry allocated RM300,000 last year for construction of walkway and sheds made of belian wood. The remainder of funds were used for car park area and fencing around the park.

Sagah also contributed some funds for the project. In his brief remarks, he said Gua Raya and its surrounding area are dubbed the Blue Lagoon by locals probably due to some resemblance in the setting of a 1980 film of the same name.

He believed the area will be a big hit among tourists once there is sufficient promotion, and he urged the management committee to learn from the success stories of Panchur and Annah Rais hot springs also located within Tarat constituency.

“Panchur and Annah Rais hot springs both have humble beginnings, but they are now popular among visitors. Since Gua Raya is surrounded by many jungle herbs, you can also start a herbal garden at a certain spot for tourists to visit – just imagine you charge fees for the cave, the herbal garden and writing on a rock, that’s a lot of money you can make,” he said.

Meanwhile, the Gua Raya management committee chairman Awat Rinjit said they have not decided on when to fully operate as a recreational park that charges fees.

“We will inform the public later,” he said, adding many activities are being planned for visitors including jungle trekking and rafting.