Friday, February 3
You are at:Home»Business»BizHive»Short term correction anticipated
For the freshest news, join The Borneo Post's Telegram Channel and The Borneo Post on Newswav. 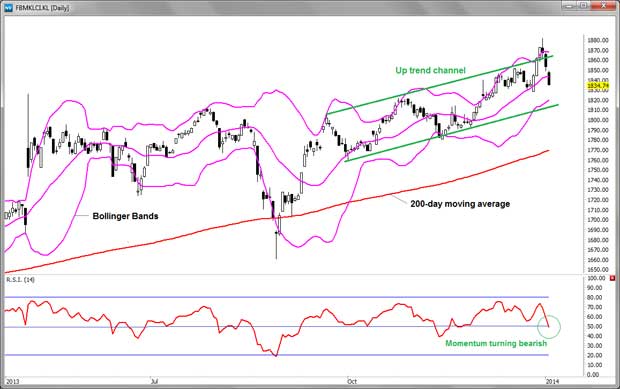 The market may be lacklustre in the next few weeks as funds will start to adjust their portfolio after a good run in year 2013.

The challenge now is whether the markets can continue to extend its bull run which started since 2008.

Locally, the market will start to evaluate the effect of rising prices in the first few months and whether interest rates will be raised earlier than expected.

Global markets started to pull back in the first few trading days after the new year.

US dollar rebounded against major currencies last week after declining for the past two weeks and oil fell.

The US Dollar index increased from 80.15 points to 80.79 points last Thursday.

The correction in the equities market helped support gold prices. COMEX gold increased one per cent in a week to US$1,222.40 an ounce.

NYMEX WTI crude oil rose 4.2 per cent to US$95.44 per barrel. The Malaysian ringgit was firm from last week at RM3.29 against a US dollar.

Crude palm oil marginally increased 0.3 per cent in a week to RM2,640 per metric ton.

Technically, the FBM KLCI is still in an up trend as the index stays above the short term 30 day moving average and the average is still increasing.

The index is also above the Ichimoku Cloud indicator.

Furthermore, the FBM KLCI is still within the short term up trend channel.

Support level for maintaining the short term up trend is at 1,820 points and as long as the index is able to stay above this level, the trend is still bullish.

In the longer term, the trend is still bullish as long as it stays above the long term 200-day moving average which is currently at 1,800 points.

Furthermore, the FBM KLCI went below the middle band of the Bollinger Bands indicator.

Therefore, these indicators indicate that the index may move further into correction.

We may expect market to be cautious and also profit taking activities on blue chip counters may prevail at least for the next few weeks.

Technical indicators show that the trend is expected to weaken further in the short term.

I am expecting the index to test the support level between 1,800 and 1,820 points, and if it does not fall below this level, we may see market start buying again.

While we may expect market to trend higher in the intermediate term, a short term correction is expected.

Therefore, expect a choppy market this week with a trading range between 1,820 and 1,840 points. While blue chips may take a breather, second liners may start to rally.