Wednesday, August 4
You are at:Home»News»Sarawak»New series of ‘Oh My English’ filmed in US 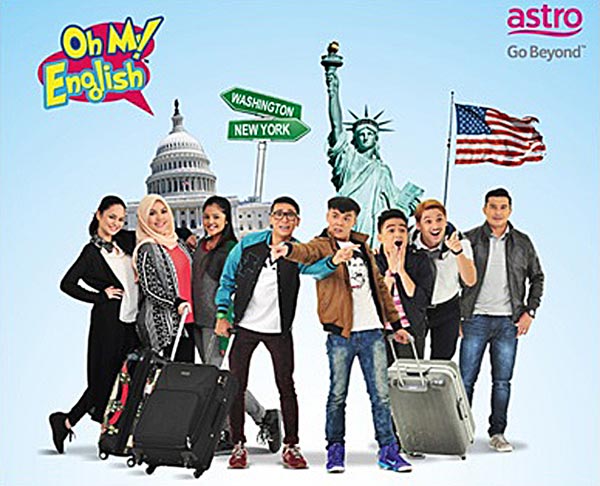 The special telemovie ‘Oh My English! – Hello America’ will premiere on Jan 15 at 9pm on Astro TVIQ (Astro channel 610) and in High Definition (HD) on Astro Maya HD (Astro channel 135).

KUCHING: Astro is pleased to usher in the New Year with a brand new ‘Oh My English’ telemovie filmed in the United States of America.

‘Oh My English!’ was the recipient of a grant from the US Department of State and the Embassy of the United States of America in Malaysia, which enabled the team to film overseas for the first time.

Fans of the show are in for a treat as the new telemovie will feature their favourite ‘Oh My English’ cast members on an exciting and humorous journey as they discover and experience America for the first time.

What’s more, viewers will be able to improve their English as they enjoy the hilarious adventure, since the telemovie will offer the same fun-learning approach seen in the TV series.

The new US-based telemovie comes hot on the heels of the first ‘Oh My English’ telemovie, ‘Oh My Ganu’, which enjoyed tremendous response, winning 1.1 million viewers on its premiere night alone, and ranking as the number one trending topic on Twitter in Malaysia.

In the latest ‘Oh My English! – Hello America’ telemovie, the story begins when the school, SMK Ayer Dalam emerge as the winner of a short film competition and the prize is a trip to the US.

The students and their teachers travel across continents to New York for the trip of a lifetime, visiting an American high school, playing American football and visiting world-famous locations such as Times Square and the Statue of Liberty.

What started out as a dream trip soon became a nightmare when a couple of students got lost and ended up in Washington DC, separated hundreds of kilometres away from their teachers and fellow students in New York.

The lost students have until the end of the day to get back to New York or they will miss their flight back to Malaysia. Will they make it back on time? Will their teachers be able to find the students? Will they be able overcome language and cultural barriers as they are forced to put their English language skills to the test?

The show’s guest stars include Nadia Aqila as Jibam’s sister; Kuah Jen Han as a fellow traveller, and a host of other appearances from US actors.

Putri Yasmin Megat Zaharuddin, vice-president of Astro’s GenNext business said: “We received overwhelming response to our very first ‘Oh My English’ telemovie ‘Oh My Ganu’. Besides trending at number one on Twitter, the telemovie is Astro’s most watched HD movie of 2013.

“Our fans come from all walks of life and their support has been amazing. This brand new US telemovie called ‘Oh My English! – Hello America’ is our way of giving back to the fans for their unwavering support. We would like to invite our fans to join the cast on a journey of discovery of America.”

She said they thanked the US Department of State and the US Embassy for their tremendous support and partnership which made the filming of the telemovie in the US possible.

“It has been a pleasure working with them and we hope this is the beginning of future collaborations. I would also like to thank our sponsor Vitagen, which has been supporting Oh My English! since its first season and is also the official sponsor of ‘Oh My English! – Hello America’.

“Last but not least, I would like to express my appreciation to the entire cast of Oh My English! and to Lina Tan and her team at Red Communications, the producers of this telemovie,” she added.

His Excellecy Jospeh Y Yun, US Ambassador to Malaysia said: “We are proud to collaborate with Astro and Red Communications on this exciting project.

“English language skills are critically important in today’s globalised world. The US government is committed to fostering English language education in Malaysia and around the world.”