Thursday, August 13
You are at:Home»Features»The plant bug, tree and ant 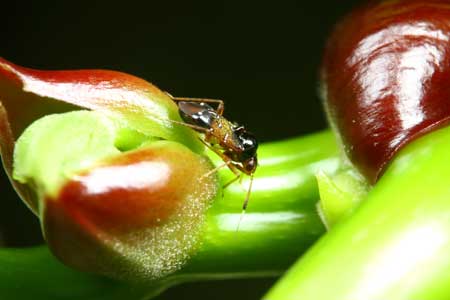 The mirid on a species of Macaranga. — Photo by Dr T Komatsu

THERE is a species of ant in the tropics and a tree that live together where both benefit.

The concept, known as mutualism, is highly specific where only one species of ant Crematogaster (Formicidae) will visit one species of tree Macaranga (Euphorbiaceace).

The tree produces food the ants like to eat and, in return, the ants dissuade others from eating the leaves.

To further complicate things, once the ants are established, another bug known as a mirid, also called the plant bug, associates with the ants. Usually, the relationship seems harmless but in some recently discovered associations, the population of ants declined.

The mirids then eat the food that was for the ants. Since there are less ants, the leaves are open to damage by herbivores because the ants aren’t there to battle them off the plant.

Japanese scientists have now found seven new species of mirids, two from Peninsular Malaysia and four from Sarawak. Uniquely, all seven have a horn-like structure protruding from the back (dorsally) of the body.

These ‘horns’ are thought to be signals to tell each species apart. A mirid would look at another mirid and see the horn and recognise it as a member of its own clan.

Another idea for the horn is that ants and the mirids could have evolved together. Since some ants also have a similar structure, it is thought they might recognise the mirids as one of their own.

The seven new mirids have many different body colours. One has a bright brown head and gold banded body. Another is a bright brown. A third is chestnut coloured.

Behaviour wise, one species has no association with ants and flies away when they come around. Another species lives among the ants but avoids touching them.

The mirids currently number well over 10,000 species worldwide and many are associated with ants although this relationship is not well understood.

Some look like and can be mistaken for ants. They are serious pests of cocoa trees in Africa and cotton in other areas.

The Marcaranga trees are found from Africa to Polynesia and are concentrated in our archipelago. The species is known as a recoloniser and they are usually found in disturbed areas where logging, roads and oil palm plantations have destroyed the rainforest.

When the plant is about 10 centimetres high, a queen from the Crematogaster ant family  chews a hole in the stem and then seals it from the inside.

The plant also produces small globules of sugar packets on the underside of its leaves for the ants to eat. The benefit to the ants include shelter and food.

The queen usually stays in the stem, reproducing for up to one year. The ants never leave the plant.

The queen is able, some scientists think, to tell the difference between the tree species by the chemicals given off by the plant.

However, some queens do burrow into the wrong stem and they quickly die.

The ants are very aggressive towards other insects that feed on the plant.

They have an amazing ability to rally their friends for a mass attack on the interloper.

They also attack any eggs that could have been laid on the leaves.

The ants also chew any vines or parts of any other plant which may touch their home.

Using their strong mandibles, they rapidly slice through the offending tissue.

The relationship between the plant bug, the ant and the tree needs further research and study to discover how these three work together.

They are part of this wondrous and amazing land we know and love called Borneo.