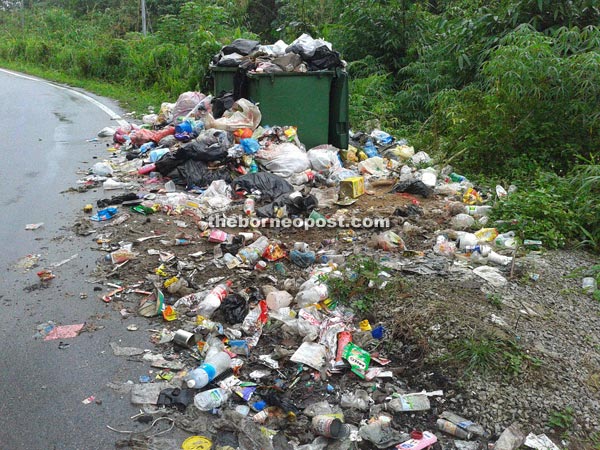 The overflowing rubbish bins and rubbish strewn on the road at one of the villages in Bau District.

KUCHING: The serious breakdown in rubbish collection in Bau has caused much concern among the residents.

Local activist Boniface Willy Tumek said since the second half of last December, the rubbish collection in the district had deteriorated arising from the termination of a non-performing contractor and the appointment of new contractors whose performance thus far had been equally unsatisfactory.

“Following numerous complaints from the residents, I visited several villages in Singgai, Bratak and Jagoi areas on Jan 10. I was shocked by the sight of overflowing rubbish bins and rubbish strewn on the road.

“Those sites where the council’s rubbish bins are placed have not only become haunts of scavenging dogs but are also infested with swarm of flies,” he told a press conference at state PKR headquarters here yesterday.

Boniface, who is PKR Mas Gading branch committee member, said he revisited some of the villages in Singai on Wednesday and found out that there was no improvement since the last visit. He also received similar complaint from a resident of Kampung Skio.

“According to an officer of Bau District Council the problem with rubbish collection in the district worsened after the appointment of three new contractors in early December last year. On my visit on Jan 10 this year, the newly contractors were into their 10th day of the contract.”

Boniface said he spoke to a contractor whose area of responsibility covers the Singgai, Bratak and Jagoi areas, where at least 32 of the 82 villages are located and was assured that the rubbish collection within the contractor’s assigned area would normalise by Jan 14.

“That did not happen. Rubbish collection in the other areas was also not much better!”

He said it appeared that one of the contributing factors was the lack of equipment, adding that the contract specified a minimum of two rubbish compactors but the contractor could only provide one.

“As a result, the contractor was unable to meet the twice-per-week collection of rubbish from every village.”

Boniface said the state PKR was also very concerned by this serious breakdown in this very essential service because of the potential impact on the health of the villagers, not to mention the effects on the environment.

“We urge the Minister of Local Government and Community Development and his assistants to immediately look into this matter, with the view of quickly solving the problem.

“We also want Bau District Council to re-evaluate their vetting procedures so that the capacity of intending contractors in the future could be ascertained before contracts are awarded.”

Boniface also reminded the Local Government and Community Development Ministry of the need to quickly identify and acquire new site for a landfill for Bau as the existing one at Kampung Skiat Lama had outlived its intended lifespan and was continuing to cause much inconvenience to the villagers.

Previous Article‘Special committee shows govt’s seriousness in caring for the people’
Next Article Govt all for initiatives that benefit people, says Mawan