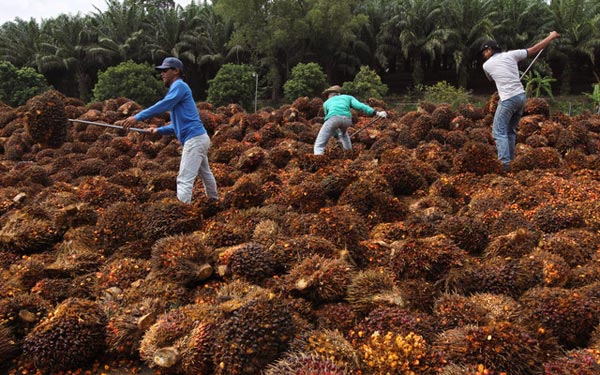 The declaration by Wilmar is discriminatory to oil palm planters in Sarawak and damaging to the state’s government’s development plan of achieving three million hectares of oil palm, Soppoa said in a statement. — Bloomberg photo

KUCHING: The unilateral action of Wilmar International (Wilmar) in coming out with a declaration policy stating ‘No Deforestation, No Peat, No Exploitation’ is detrimental to Sarawak’s oil palm industry, says the Sarawak Oil Palm Plantation Owners Association (Soppoa).

This declaration, Soppoa said, is damaging to the state’s government’s development plan of achieving three million hectares of oil palm.

Wilmar recently signed a Memorandum of Understanding (MOU) with Unilever, a global consumer goods leader, that aims to accelerate sustainable market transformation for palm oil with the declaration of ‘No Deforestation, No Peat, No Exploitation’.

“Soppoa is very disappointed by the unilateral action of Wilmar in coming out with the declarations as it is discriminatory and detrimental to the development of oil palm industry here,” it said.

“In fact, it will have a major impact on the oil palm industry here given their high volume purchase in Sarawak.”

Wilmar also said it will immediately cease to do business with suppliers who do not take immediate action in compliance with the policy.

Only young scrub and cleared open land with mostly grass and non-woody plants are eligible to be planted under the conditions set.

In Sarawak, there are no scrub or grassland areas. As such, the development of oil palm will have to cease immediately to comply with the conditions set.

As declared by Wilmar, suppliers must comply with their policy by Dec 31, 2015 after which verifications by independent consultants will be compulsory for suppliers to meet the conditions set.

Failure to comply will see those suppliers being dropped from their list.

“Willmar’s policy is based on a Roundtable on Sustainable Palm Oil (RSPO) benchmark with nine other additional conditions which is driven by NGOs (non-governmental organisations) based on assumptions, prompting the Indonesian palm oil producers (GAPKI) to pull out of the RSPO last year,” said a Soppoa spokesperson.

“This is because the RSPO aims to discriminate against oil palm in peat based on the assumption that peat has high carbon stock and allegedly releases high carbon dioxide (GHG). These allegations and assumptions have yet to be scientifically proven but Willmar and Unilever have already passed judgment on the industry here.”

Currently, Malaysia has been conducting scientific research for the past four years, through the Malaysian Palm Oil Board (MPOB) and Tropical Peat Research Laboratory (TPRL) to ascertain the amount of GHG releases in oil palm planted in peat areas which will provide scientific data and facts.

“The RSPO assumptions are based on temperate peat conditions which are totally different from those in tropical peat areas,” the spokesperson revealed.

Soppoa urges the state and federal governments to view the matter urgently and take immediate steps to save the industry from such discriminatory actions which are detrimental to the oil palm industry in Malaysia.

Soppa also calls on the Malaysian Palm Oil Association and other members of the palm oil industry in Malaysia to be united to jointly oppose the declaration.